Left 4 Dead and Back 4 Blood are the ultimate in co-op zombie-busting carnage, but developer Stray Bombay’s The Anacrusis has taken things back in time and off-planet with its 60s-inspired psychedelic sci-fi setting. And rather than zombies, the passengers of The Anacrusis come face-to-face with some intergalactic nasties.

Of course, as a current-gen co-op shooter, you’d hope that The Anacrusis gives you the ability to squad up with your pals, regardless of the platform you are all on, and blast through those otherworldly beasties. Fortunately this is the case, with the game boasting full cross-play support across the platforms it is available on.

But how does The Anacrusis cross-play work? Well, it’s not quite as simple as opening up a friends list and hitting ‘invite’. In order to get in on the action, you’ll need to make use of the game’s Party Code system, which will let you and your pals get into a lobby with each other.

So without further ado, here is everything you need to know about The Anacrusis cross-play, as well as how to invite friends using the Party Code system.

Stray Bombay confirmed in a dev blog that The Anacrusis will ship with full cross-play support.

This covers all of its release platforms, including Xbox Series X|S, Xbox One, and PC – both via the Epic Games Store and Steam. If you already own Xbox Game Pass, then you’ll be able to jump in for no extra cost. 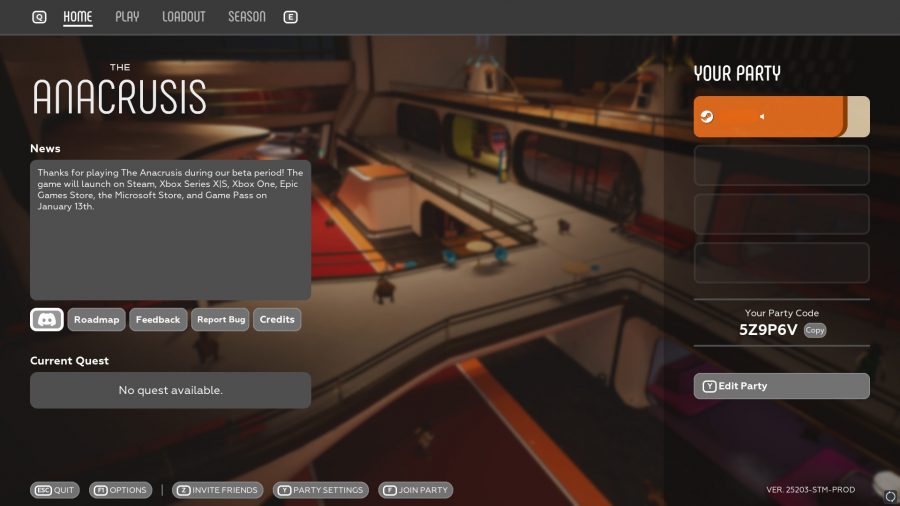 While you can invite friends on your own platform through its built-in friends list, in order to play with friends elsewhere you will have to invite them into your lobby using a six-digit, randomly-generated Party Code. Think Jackbox, but more shooty.

Once you have loaded into the game, you’ll see your Party Code on the right-hand side of the screen. This code changes each time you boot up the game, so it’s not worth noting down. From there you can either send your own code to your friends, or if you are joining someone else’s game hit ‘Join Party’ and enter their Party Code. Et voila, you’re in.

Can you turn cross-play off in The Anacrusis?

It is not possible to turn cross-play off in The Anacrusis.

Currently there isn’t an option to do so in the options menu. However, seeing as The Anacrusis isn’t a competitive title, where disparities between console and PC can sometimes affect the outcome of a match, we don’t really know why you’d want to. After all, turning off cross-play will only make queue times longer as the pool of players available to team up with is reduced.

And that’s it, everything you need to know about The Anacrusis cross-play and The Anacrusis Party Codes. Stray Bombay’s done a great job of keeping its cross-play system simple, which should make teaming up seamless.