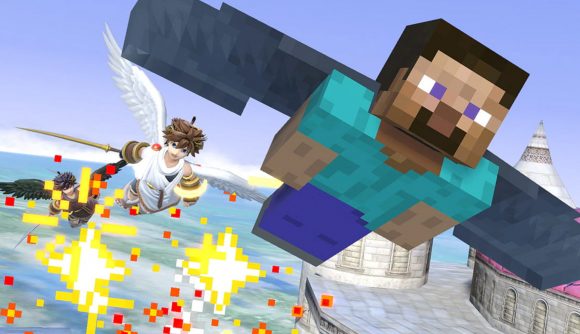 The Super Smash Bros. Ultimate patch 9.0.1 went live yesterday to fix up the numerous issues that the new character Minecraft Steve was facing during play. Members of the Smash Bros. community weren’t expecting much from the patch as Nintendo had revealed it would not affect any characters outside of Minecraft Steve or Alex.

Little did the fans know, the update included removal of a piece of pixelated meat held in a risque position by Minecraft Steve in his win screen. The meat had become somewhat of a meme in the community, and many fans are mourning its removal on Twitter by sharing their favourite Minecraft meat-based memes. Oddly enough, Nintendo decided not to include the meat removal in its official 9.0.1 patch notes post.

Outside of the meat removal, Super Smash Bros. Ultimate players who main Minecraft Steve or Alex are pleased with the tweaks made to the character, as it was having issues interacting with the map, opposing fighters, and items during battle.

Although Steve’s meat is now gone, our memories will remain in meme-form forever.

Minecraft Steve with his Meat. pic.twitter.com/ekWyohBJjI

Check out the full patch notes from the official Nintendo website below.