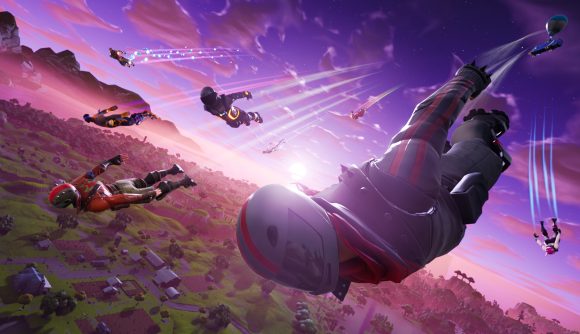 From its humble beginnings of having only a handful of weapons, items and skins to now turning over hundreds of millions of dollars a month in revenue from cosmetic item sales. The map has evolved from a sparse grassy environment dotted with points of interest to being a dynamic and constantly changing environment with snow drifts, deserts and interdimensional rifts. The play style too has changed, morphing from a relatively slow-paced game that focused on strategy and gun skill to prioritising frantic build battles, speedy rotations and quicker gameplay all round.

Two years on, Fortnite has become a worldwide phenomenon, boasts an extensive esports scene with enormous prize pools, and has helped make the careers of countless streamers, many of whom are now multi-millionaires and global stars.

Some of those famous names have taken to social media to give their thanks to the game that redefined the industry and look back at what the game used to be.

One streamer whose career has been completely changed by Fortnite is former Call of Duty caster, Jack ‘CouRage’ Dunlop. Now a popular content creator with 100 Thieves, Fortnite has been the main driving force behind his rise on Twitch.

CouRage says that he is “forever grateful” for how the game changed his life:

I will never forget the immediate love I felt for the game. No skins, no extra modes, and nobody had a clue what was going on. Just pure fun.

Since then, Fortnite has completely changed my life and I’m forever grateful.

Other streamers echoed CouRage’s sentiments. Ben ‘DrLupo’ Lupo, who has helped raise hundreds of thousands of dollars for charity through Fortnite streaming tweeted:

Back when building consisted of a ramp and a wall to shoot over.

When editing your builds was a waste of time.

What a rollercoaster it’s been. A helluva ride, wouldn’t trade it for anything. ❤️?

Today is the two year anniversary of Fortnite

It’s crazy to sit back and think about the good old days and realize how much the game and community has changed. Fortnite will forever be a game that sits right within my heart.

Thank you all for this incredible journey. ?‍☠️?

And there was even a tribute from Epic Games’ Worldwide Creative Director Donald Mustard:

Today is the 2 year anniversary of Fortnite Battle Royale! It’s been the most crazy, fast, humbling, inspiring, exhausting, fulfilling, and amazing 2 years of my life.

Being part of the team that creates Fortnite is a joy. And we are just getting started 🙂 pic.twitter.com/GvdkQynXMG

Who knows what the next two years will have in store for the battle royale. However, one thing everyone can agree on is that Fortnite has gone down in history as one of the most influential video games of all time.