At the start of 2021, Ian Proulx and his team at 1047 Games sat down and set some sensible, measured goals for its arena shooter Splitgate. The plan for the year involved bringing Splitgate, which was still in its beta stage, to the console market in the summer, and hopefully grow enough to launch fully a few weeks later. For a successful console release, where players would be satisfied with queue times and matchmaking, Proulx aimed for a modest concurrent player count across all platforms of 2,000.

“Obviously, [there was] a very different outcome,” the 1047 CEO and co-founder tells The Loadout with a chuckle. What actually happened was an enormous surge of players following Splitgate’s console launch. Despite still being in beta, first-person shooter fans piled in at such an unforeseen rate that servers hit capacity and the 1047 team had to take the game offline to fix server issues and set up queues.

“The peak of what we were able to handle was 175,000 concurrent,” Proulx recalls, “and we had more than that, so we probably had about 200,000.” With roughly a 100x mark up on his expectations at the start of the year, Proulx and his small development team were now looking at an enormous opportunity, but were also trying to sort an avalanche of issues.

“There were a lot of extreme highs and lows,” Proulx says, “because it was like: ‘Oh, the numbers went up. Awesome.’ And then there was extreme stress, like: ‘Oh gosh, we’re in uncharted territory, what’s gonna happen?’

“There was a lot of that repeatedly, every single day, of extreme highs and then extreme lows. We’d push an optimisation that was, like, totally not tested whatsoever. And it would work most of the time. It was definitely a mixture of emotions during the summer.”

Proulx admits there was little time to enjoy those moments where things were going as planned – partly because of those constant technical issues, but also because he was busy conjuring up a completely new plan of action for Splitgate. While the spike in players was unprecedented, 1047 acted swiftly to adjust its strategy on the fly – something it would have to do more than once during the summer. 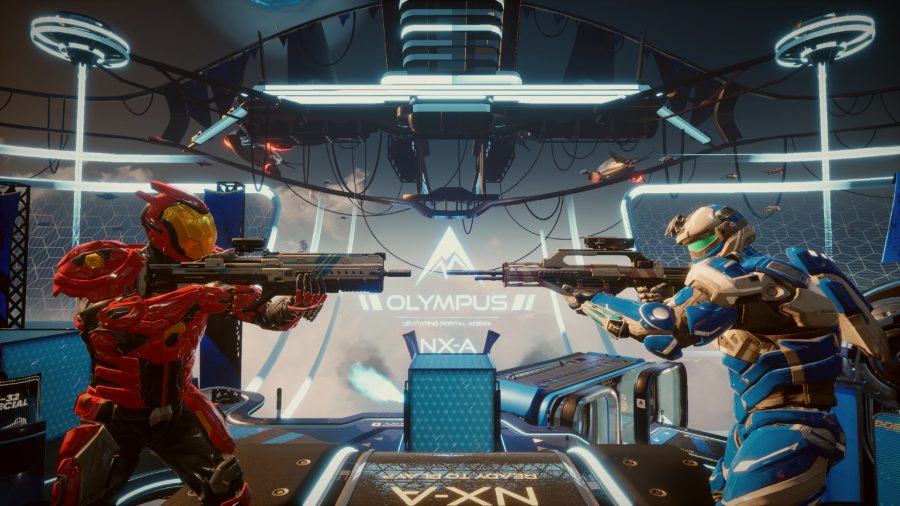 The game’s original full launch date of July 27 – and the marketing budget Proulx had put aside earlier in the year to build interest in the weeks leading up to that date – were now canned. “There’s no reason to do any marketing, because we don’t want more players,” he recalls thinking.

Instead, the plan was shifted to fully launch Splitgate in August, with no marketing necessary. But even plan B would quickly be scrunched up and tossed aside – Splitgate was the talk of the town, and it hadn’t gone unnoticed. After speaking with potential investors, 1047 managed to secure $100 million in a funding round.

My vision of what Splitgate 1.0 looks like is a very different game than what I thought it was six months ago

“I think we did an amazing job building Splitgate – I’m very proud of it, I think it’s a terrific game, and I think the reviews reflect that,” Proulx says. “But the reality is there’s just so much more we can do with this kind of budget that we never could have dreamed of before. And so at that point, we basically realised: ‘Why would we possibly launch this thing in August?’ I’ve said this before, but my vision of what Splitgate 1.0 looks like is a very different game than what I thought it was six months ago.”

Because of this influx of cash, which could in time be used to grow Splitgate in ways previously inconceivable, 1047 delayed the full release of the game indefinitely.

Despite remaining in open beta so that 1047 could work on a new long-term plan, Splitgate managed – and still to this day manages – to retain a decent amount of players from the summer spike. Season passes full of content and themed events like Splitmas were pushed out, and the Splitgate Pro Series was launched to appease the game’s high-skill players and to kickstart its esports scene.

While Proulx says breaking Splitgate’s old peak player count record of 11,900 (set in its first week on PC in May 2019) and securing investment for 1047 were two achievements he was particularly proud of this year, he also appears equally proud about Splitgate’s community.

He recalls rewarding the loyalty of Twitch streamer ‘Mikaveli’, who had been playing and streaming Splitgate since the early days of its PC beta, with a raid from the official Splitgate channel after a dev stream. While it was a kind gesture that showed how much 1047 values its community members, it unfortunately backfired.

“We had some ridiculous number of viewers on Twitch after a dev Q&A and then we hosted him right after,” Proulx says. “His reaction was just like the most insane thing I’ve ever seen. But his entire stream ended up crashing because there were so many people flooding his stream and following, donating, and subscribing. I’m pretty sure it crashed his entire computer.”

Well I know I’ve said it a lot this past couple weeks but, today was unbelievable. HUGE shout out to the best game ever, Splitgate my favorite game out there and HUGE thank to for the raid, and to everyone who came along, followed, subbed, gifted or hung out, I love this fam 💙 pic.twitter.com/4Hmi1t9Wi3

Showing appreciation to those that have stuck by Splitgate and helped shape it into the game that players loved when it came to console appears to be high on 1047’s list of priorities. Keeping them onside is as important now as it has ever been, what with a rival game like Halo Infinite rocking up. However, Proulx – a massive fan of the Halo franchise himself – was “never worried” that Infinite could poach players from Splitgate and stomp it into the ground.

I honestly think that, in the long run, Halo Infinite and Splitgate will help each other

“I’m actually glad [Halo Infinite] is out,” he says. “I honestly think that, in the long run, Halo Infinite and Splitgate will help each other. I think that there’s just so much noise and so many battle royales right now, and [these two games] are bringing people over to the arena shooter genre. You know, there’s a lot of kids who have never played Halo, right? There’s a lot of kids who have never played Quake or Unreal Tournament. They’ve never played this kind of game. And getting them exposure to that I think is just a good thing for the genre as a whole.”

Proulx also reveals that Splitgate’s player count on PlayStation consoles has actually “gone up” since Infinite’s multiplayer launched in November, which is certainly evidence that backs up his theory.

So after a year where modest expectations were washed away by a tsunami of players and investment, what’s next for Splitgate and 1047?

Proulx remains tight-lipped when asked whether 2022 will be the year we see Splitgate come out of open beta and fully launch. However, he does let us in on some secrets about how much Splitgate and his studio will evolve next year. 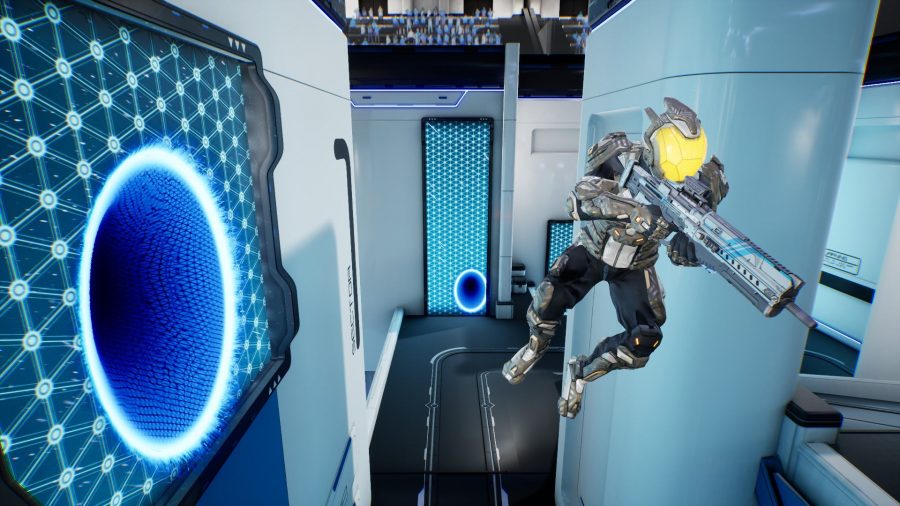 In September 2021, Proulx said in an interview with TechCrunch that Splitgate was around 25% complete. When asked what percentage he hopes Splitgate will be at by the end of 2022, Proulx cautiously predicts “at least 50%” – although he does quite rightly point out that no live service game is ever 100% complete.

2022 will see the release of an optimised version of Splitgate for PS5 and Xbox Series X|S, and of course a continued stream of new content. In the background though, 1047’s massive hiring spree of developers will mean bigger projects can be worked on, and it’s this work that will help Splitgate take its biggest strides towards triple-A status.

However, there’s also one other thing on Proulx’s mind for next year: Splitgate’s art style.

“One of the things we really want to do is establish our own art style,” he says. “I think that Splitgate’s art style is very much ‘Halo meets Portal’, and the brand is very much that too. I think for a small indie game with no marketing budget, that was incredibly effective – it was just a very succinct way to get people interested. But that’s not what we want to be. We want to establish something where you look at it, and you know it’s Splitgate and not just a pretty well-executed Halo-style game.

“For the [original] size of our team and budget, I think we did an amazing job. It looks phenomenal. But I think that with the artists that we’re hiring, and just more manpower, really, we’re talking about redoing pretty much everything in terms of art to come up with something that’s memorable, unique, and triple-A.”

While some might have expected to see that $100 million investment be put to use on Splitgate straight away, the cash is not being hurriedly thrown at the game. Proulx is being measured and strategic, and has explained on several occasions this year that improving Splitgate and turning 1047 into the “next Riot Games” will take time. However, that comparison is interesting in itself. While for close to a decade Riot was a one-game studio with League of Legends, it now has several spanning multiple genres. So when Proulx talks about emulating Riot’s success, is a multi-genre studio what he’s alluding to?

“I personally have two other game ideas that I would like to do at some point, but I think they’re both at least five years away,” he says. “They’re both shooting games. Neither of them [have anything to do] with Splitgate. There’s no portals – they are their own very unique things.” 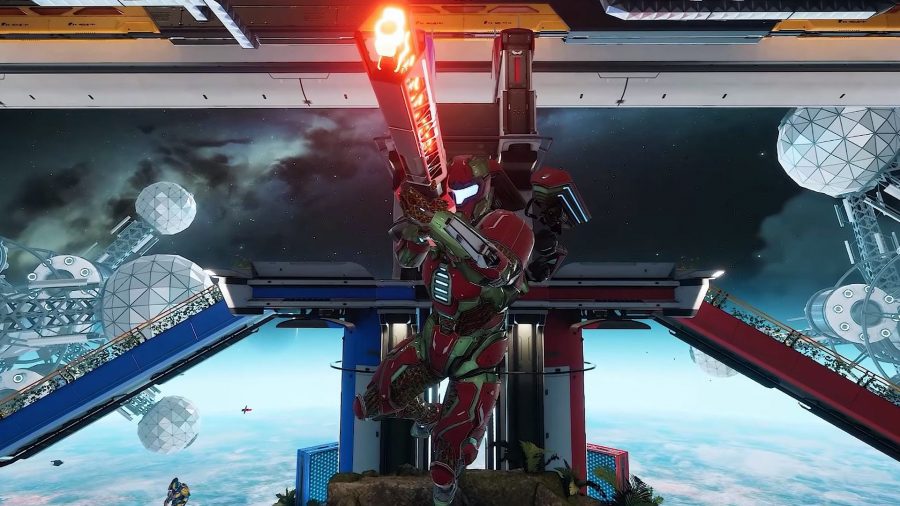 Speaking to Proulx, it’s clear that he doesn’t want to rush things. Yes, a big hiring spree is currently underway thanks to that investment round, but tangible results of the new developers’ work likely won’t be seen for some time.

Splitgate’s unforeseen surge in popularity in 2021 was enough to prove to Proulx and investors alike that the concept of this game was strong, and along with the goliath that is Halo Infinite, this year has definitely proved that arena shooters are alive and kicking.

Many mainstream gamers plugged into games like Fortnite or Call of Duty might not hear or see much from Splitgate in the near future – but that’s ok in Proulx’s book. It’s all about the longer term for both the game and studio he helped create. Whether it happens in 2022 or maybe even beyond, 1047 and Splitgate will likely return with a big, noticeable bang.

That’s all ahead of us, but what’s been left behind us is a remarkable story of a game that broke servers, crashed PCs, and shattered expectations with its sudden popularity.