“A lot of people compare us to a battle royale,” says Josh Holmes, CEO and co-founder of Midwinter Entertainment. The studio released its first game, Scavengers, in early access two weeks ago, and Holmes is still coming to terms with the constant comparisons to existing games and genres.

“For a long time, I really fought those comparisons. But I understand that there are certain aspects of the play experience that, when you look at them from a distance, you’re going to immediately draw that connection. Whether Scavengers is the evolution of battle royale, survival royale, or whatever you want to call it, I think the thing that differentiates us is the balance of PvE and PvP, and the strategic optionality.”

You can win a round of Scavengers without once engaging in PvP. Similarly, you can win by completely ignoring the AI NPCs who inhabit the frozen tundra. Holmes is keen to prove that both options, combined with the survival elements of the game’s icy sandbox, offer an equally tempting path to victory.

He explains that he wants Scavengers to “give multiple paths to victory and allow players with different play styles to employ those within the session to find success.” This results in a delicate balancing act, where rewards for killing other players must roughly correlate with the rewards for killing NPCs – a variety of John Carpenter-esque mutants – based on the perceived difficulty of defeating each. 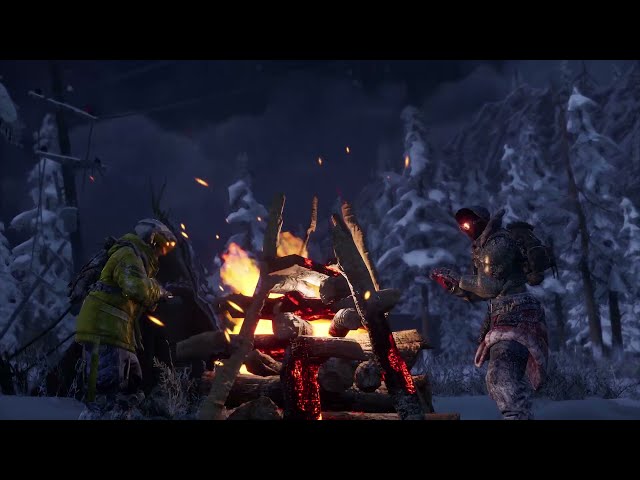 However, before balancing could even cross Midwinter’s collective mind, it had to actually launch the game. Scavengers launched via Twitch Drops, a decision that came for two reasons, explains Midwinter’s head of production, Mary Olsen. The first was simply to drip-feed players to the server to potentially stave off issues before they became too widespread.

Once you’re a few matches in, you're much more likely to stick around.

This only worked to some extent. The Twitch Drops release was blighted with players not receiving codes, and early bugs in the lobbies prevented players who had the game from joining sessions with their friends.

“It was pretty chaotic,” Olsen admits. “We were just moment to moment firefighting.” However, she praises the team for coming together and fixing the issues. “We can simulate and trial Twitch Drops and some of the lobby stuff, but it’s nothing like testing them with your players at scale.”

No launch goes off without a hitch, but the second reason for implementing Twitch Drops was less about managing the servers and more about letting players get a better feel for the game before jumping in. 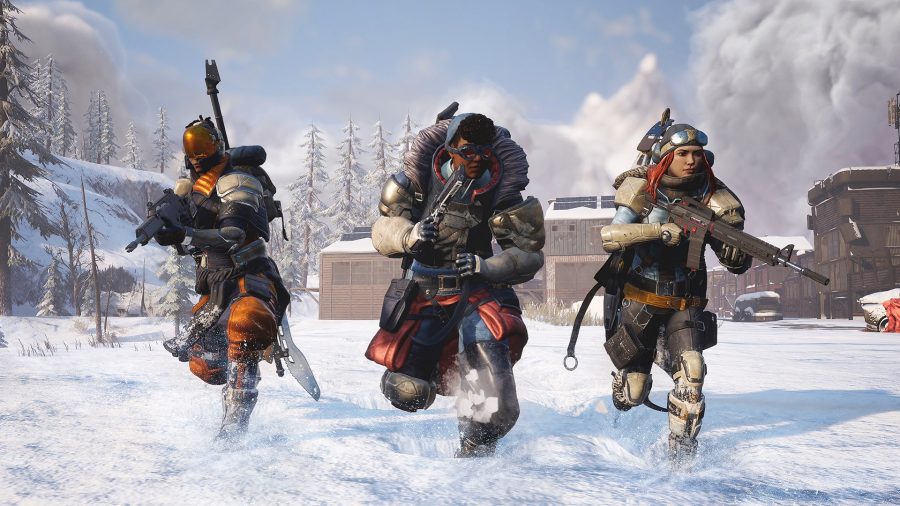 “This is the first time that we’ve allowed streaming of Scavengers, and we saw that as a big opportunity because there’s a bit of a ramp in,” she explains. “We find that once you’re a few matches in, you’re much more likely to stick around.”

She cites the sandbox situations, adaptable game plans, and multiple routes to victory as the reasons that it takes a couple of rounds to really stick. After all, you may not enjoy your first round where you go hard on PvP, but Olsen believes that players might be drawn to a different approach by watching a streamer change up their tactics.

“It’s not just a sweaty competitive shooter,” she says. “Because of the survival elements, the randomisation, and the storms, there are a lot of things going on that will allow for games to play out differently each time.”

The storms close in from all sides, pushing players towards the centre of the map like in traditional battle royale games, but also randomly crop up within the circle to force players inside for protection, abandoning any fights or tasks they might currently be undertaking. While many players call for RNG elements to be minimised in competitive FPS games of similar genres like Apex Legends or Fortnite, Scavengers is embracing the randomness that makes each round different. 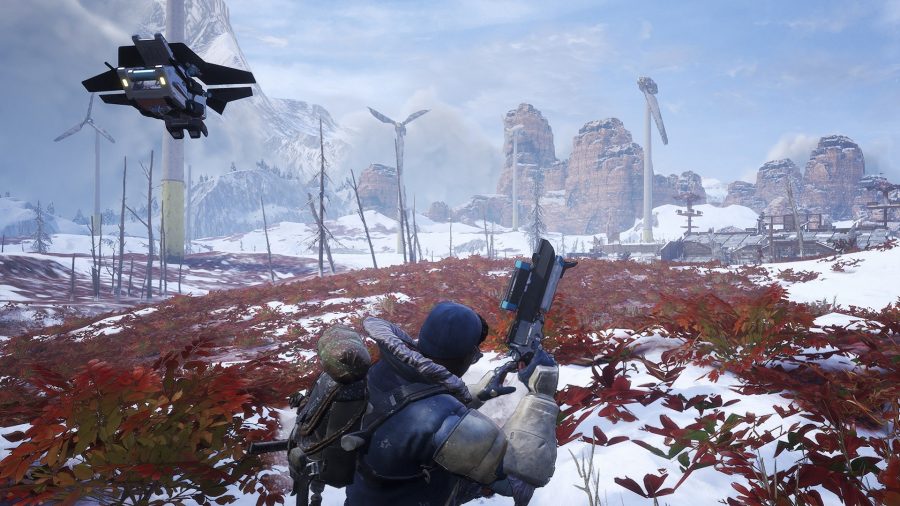 “One of the things we wanted to do was provide interesting choices to players,” says Holmes. “We wanted players to go into the session with a plan in mind and some options at their disposal, but then be forced to react to what the session is presenting them with, and make really interesting and difficult choices between the things that are available to them and their loadout.”

An early patch about a week after release nearly cut the scrap economy in half – that’s the material that you use to craft weapons, armour, and vehicles. The decision was met with disdain from streamers who felt they couldn’t upgrade their armour to the highest level while simultaneously crafting the best weapon, but that’s exactly the result that the developer wanted to achieve.

As a result, it’s rare that players will be kitted out with the optimal loadout even in the endgame of Scavengers matches. And they will have to adapt to the situation that presents itself. After all, you don’t have to be the last team alive to win a round of Scavengers, you simply have to be the team on the extraction spaceship when it departs the planet. This allows for multiple playstyles, but an abundance of scrap led to seven or eight-team fights regularly occurring in the final moments. 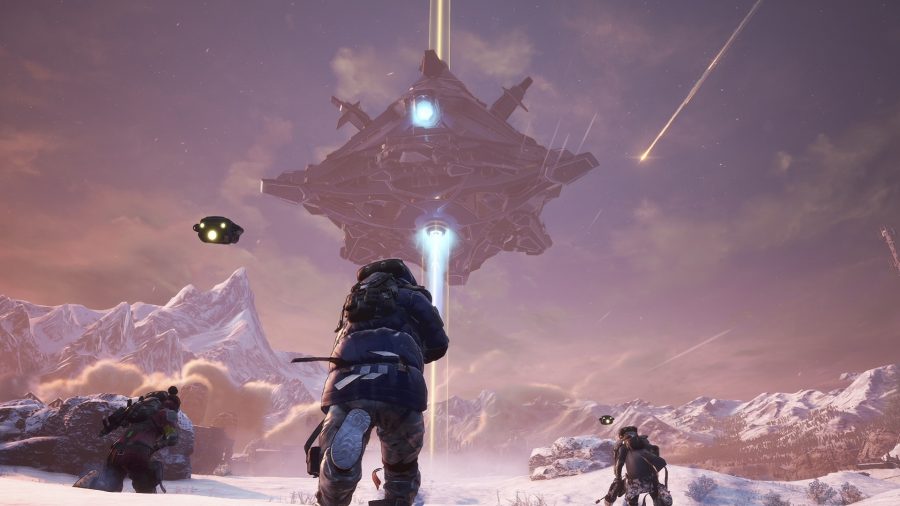 Vastly reducing the scrap economy and making it more difficult to fully upgrade your character forces players to make choices when it comes to the final moments. If you don’t have the kit to take a fight head-on, more players might adopt a stealthy approach rather than gatekeeping the ship and blowing approaching teams out of the snow in all-out PvP warfare.

However, player feedback is important and the Midwinter developers are listening to what players have to say. They intend on staying true to their vision and balancing all feedback with the data that they see from players in-game, rather than just catering to the loudest voices in the sandbox.

“In gaming communities you can often have some pretty loud voices in the room that have a strong opinion in a particular direction. But that’s not necessarily representative of the greater community,” says Holmes. He is keen to make sure that development doesn’t ignore the “silent majority” as Scavengers proceeds through its early access period. 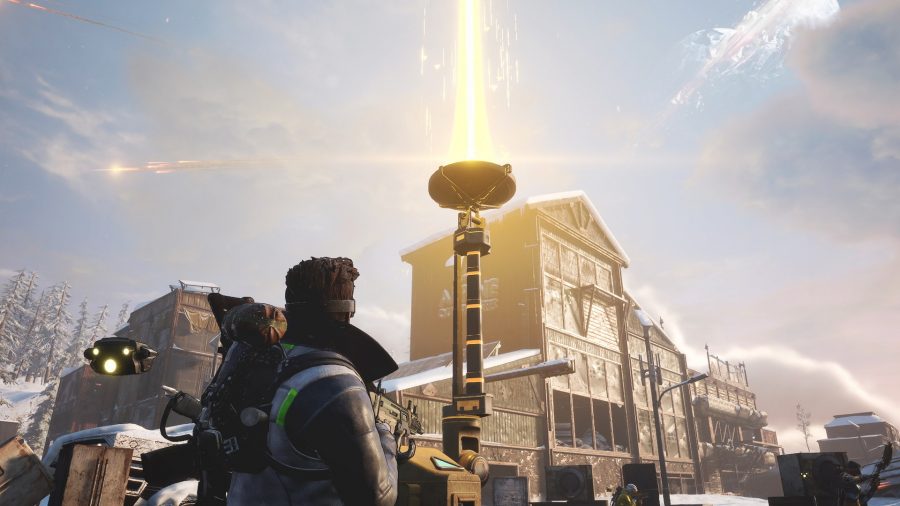 Early access is a time for experimentation, and nothing is more experimental than Scavengers’ ScavLabs, a mode not currently available in the early access game, but that has been tested with players from the game’s Discord server.

The mode’s first outing saw around 1,700 players drop into the sandbox with over 8,000 more AI players joining the fun. Two developers controlled the game’s physics, shooting players with magic blasts from their giant hands, as if Fortnite’s Travis Scott event had gone awry and his giant avatar had gone mad with power. When the devs had had their fun playing tennis with ten thousand tiny humans, the crowds were tasked with splitting into groups, sliding down hills, and otherwise indulging in mass activities. But this wild and wonderful weirdness may not be left as an experiment in an alternate server.

“ScavLabs is going to be experimental,” says Holmes. “We’re gonna try a bunch of things in there and see what rises to the top. If things stick, then they may migrate into the core game.”

The potential of ScavLabs is clear. Whether the developers want to implement Fortnite-esque world events, host huge tournaments, try out LTMs, or just bring the community together in a digital-yet-more-physical-than-Discord-forums sense, ScavLabs has potential to change the game.

As with ScavLabs, Scavengers is not a finished product by any means. “We aren’t wide open on PC yet and we are still coming to console,” says Olsen. “We feel like we’re just starting out in a lot of ways. But it’s been a really cool start.”