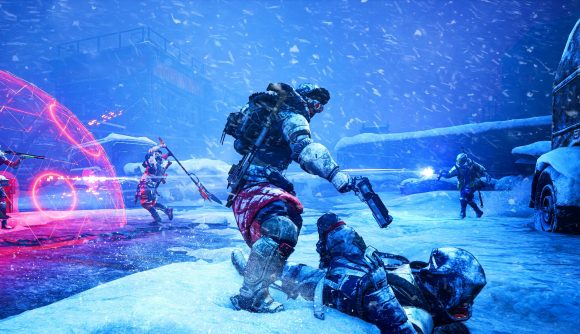 Midwinter Entertainment, the developers of the wintery, post-apocalyptic PvPvE Scavengers, has been sold by its parent company, Improbable, just over two years after its initial acquisition, causing the console versions of Scavengers to meet grizzly ends befitting the survival game.

But who has Midwinter Entertainment been sold to? The answer can be found north of the border of Midwinter’s Seattle location in the unlikely place of Quebec, Canada – the home of Dead by Daylight creator Behaviour Interactive.

The companies confirmed the Behaviour’s acquisition of Midwinter in a Eurogamer exclusive. “When we first started talking to Behaviour months ago,” Midwinter head Mary Olson says, “the alignment across the teams was striking, and in my experience rare.” She states that they are “thrilled” to join the Canadian company and seeks to “expand Behaviour’s portfolio.” Only time will tell just what that means, but Dead by Daylight is no stranger to pioneering fresh new content for its players.

Behaviour CEO Remi Racine feels similarly about the melding of the two studios. “Behaviour was not just looking for any studio, but the right studio,” he says. “Chemistry was essential and our similar values, cultures and our commitment to creating games that push boundaries and defy expectations make Midwinter a perfect fit.”

Racine goes on to say that September marks the 30th anniversary of Behaviour’s founding and that its revenues have more than doubled since 2019, which might indicate that the company possibly has some interesting new projects in the pipeline for later this year to mark the occasion.

Anyone fancy a Dead by Daylight survival game?