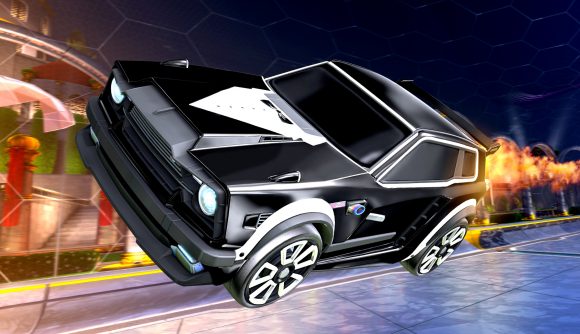 Can you believe Rocket League is turning seven this year? It only seems like yesterday that the rocket-powered cars crashed the PlayStation Store for the first time, whipping people up into a frenzy. The game has changed quite a lot since then and to celebrate its innovation, Psyonix is introducing two party-themed limited-time events, a whole host of challenges, and rewards – which, for the first time, include the game’s premium currency Credits.

The Birthday Ball will be kicked off a day earlier than the big anniversary on July 6 by the limited-time event 2v2 Heatseeker. This fan favourite sends the ball flying towards the enemy goal every time you hit it, making for a high-stakes game that’ll keep you entertained from grinding the Rocket League ranks. This mode will only be available uyntil July 13, where it’ll then be replaced by Knockout, a brutal game mode where there is no ball.

Both these modes will be supplemented by the Birthday Ball event challenges, which will allow players to earn up to 300 Credits as a reward. This is the first time Credits have been given away as rewards in-game and offers those who avoid the battle pass and the store to get their hands on some new cosmetics.

The other challenges will reward players with the Golden Goat title, the Precious Metal avatar border, and Golden Eggs. The Golden Eggs don’t sound too exciting, but when you consider they unlock items from the Championship Series 1-4, you might want to get your hands on as many as you can.

And that’s not all; Psyonix is spoiling us with some anniversary themed items too. The Fennec, one of the best Rocket League cars, is getting a Titanium White skin and a Fancy Formal Decal, while the Spyder Anniversary Edition Wheels and the Top Hat will rotate in the item shop throughout the week.

The Birthday Ball will be live from July 6 until July 19.