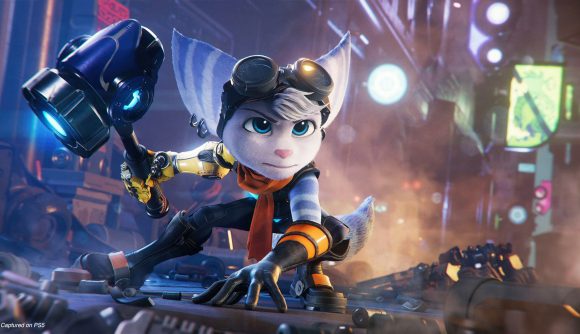 Out of all of the great gaming mysteries of recent years, for the PlayStation community perhaps the greatest of all currently surrounds the identity of Ratchet & Clank: Rift Apart’s new female Lombax. When the announcement trailer finally aired last year, the question on everyone’s lips was “who is she?”

Well, this year players will finally get the answer after developer Insomniac Games today announced that Ratchet & Clank: Rift Apart will release exclusively for the PS5 on June 11, 2020. Writing for the PlayStation Blog, the studio’s creative director, Marcus Smith, reveals the news while thanking players for their continued support “across the last 19 years and four generations of PlayStation consoles.”

While it was anticipated that Rift Apart would launch during the PS5’s own launch window, the year’s end quietly passed by without any new information. However, it appears that the extra time has been required to ensure that it is “a showpiece game”. Alongside the release date, Rift Apart’s box art has also been revealed, showing the titular characters in parallel with the unnamed Lombax who for now has been dubbed ‘Ratchette’.

The release date reveal trailer can be seen below.

Eager fans who preorder Rift Apart will be rewarded with throwback content in the form of Carbonox armour – first featured in 2003’s Ratchet & Clank: Going Commando – and the Pixelizer weapon from 2016’s Ratchet & Clank. These items have received visual upgrades for their next-gen debut, including “high-defininition materials, lighting responses, and ray-traced reflections.” Shiny.