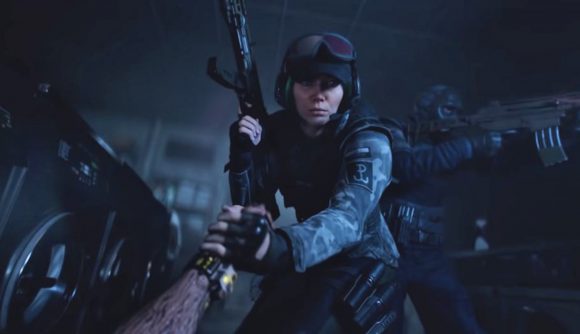 Ubisoft has revealed that its long-awaited (and slightly mysterious) co-op Rainbow Six experience, Rainbow Six Quarantine, is getting a name change and a gameplay premier at this week’s Ubisoft Forward showcase.

The game will now be known as Rainbow Six Extraction, and according to creative director Patrik Methé, “making sure no one gets left behind” is at the core of the game. While Extraction will build and borrow aspects from tactical FPS Rainbow Six: Siege, this is now confirmed to not be a PvP experience but a PvE co-op experience instead.

The actual enemy you will be looking to escape and survive in Extraction has also been confirmed. According to Methé, an “always learning alien threat” is what you’re up against, and a short teaser trailer separate from the name announcement, shows an ominous black substance spreading around an abandoned facility before turning into violent, spear-like appendages crashing through the floor.

Safe to say, you want to escape this thing, it looks nasty.

The name reveal also confirms that the first look at actual gameplay will come later this week at the Ubisoft Forward presentation on June 12. Despite not seeing any gameplay today, Methé says that in Rainbow Six Extraction, it is “up to you and your squad to decide when to push forward and when to extract.”

Lead producer Antoine Vimal du Monteil also gives us another teaser on what to expect from the gameplay. The direction of the game throughout development became focused on “operators uniting against a common enemy, learning about the parasite, how to overcome it, and protecting each other along the way.”

With both Methé and Vimal du Monteil talking about learning, it appears that this alien threat will be AI-controlled and either adapt to your strategies or become increasingly harder. This also lines up with leaks suggesting Ubisoft were attempting some form of ranked PvE experience for then Rainbow Six Quarantine.

Siege tactics and gunplay in a co-op, PvE environment certainly seems like an interesting mix, and it’ll certainly be one of the star attractions at Ubisoft Forward later in the week.