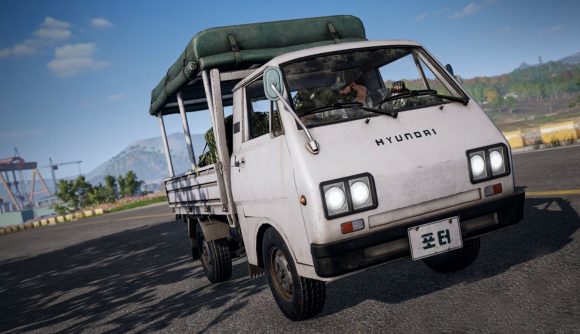 PUBG 13.2 update is here, and while it is stacked with changes and new features – such as the addition of the P90 SMG, Blue Zone Grenades, and a few Taego tweaks – there’s only one thing we’re interested in: a dinky little Hyundai truck.

A new vehicle is coming to Taego, and it’s called the Porter. This cute little minivan has space for four players, and is great at navigating its way through rugged terrain. But why do we love this humble Korean truck so much? It comes with a brand new feature that could turn the tide of your Taego matches.

The Porter debuts a new Trunk System in PUBG, which allows squads to dump their weapons and loot in the back and cart it around the map. The Porter can hold any item that you can carry around in your own personal inventory, as well as weapons, vests, helmets, and backpacks, and any player can access it by walking next to it or getting inside it.

There is a limit to how much you can haul around in the back of your Porter, although it is quite generous. With a capacity of 400, it essentially acts as another fully-kitted out player on your squad when it comes to inventory space.

The full breakdown of item weights can be found in this blog post, which gives you a rough idea of how much you’ll be able to store in your Porter’s trunk.

While this all sounds mighty convenient, it comes with a caveat – if your 1,200 HP Porter is destroyed, all the gear that is kept inside at that moment will be lost. So be careful where you park it, alright?

While the Porter is the highlight of this update for us, there are plenty of other changes too. Blue Zone Grenades are a new throwable that will deal damage over time and are great for weaseling out building campers, Taego has some new weather conditions, and the Comeback BR system has received some improvements following community feedback. Check out the full PUBG 13.2 patch notes here.