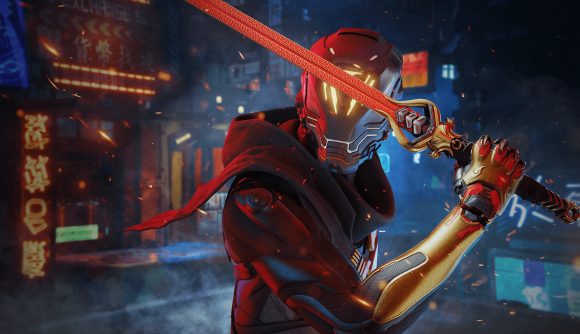 Ghostrunner was hugely successful when it was released last year. Arguably the best cyberpunk game to release in 2020, the first-person shooter combines satisfying gunplay with slick parkour action – and players lapped it up. Touted as a combination of Titanfall 2 and Dishonored, publisher 505 games has announced a follow-up to the FPS game is in the works.

With a new game mode and a host of DLC already slated for release later this year, 505 Games says that the second instalment will be developed by One More Level, the same Polish studio behind the original game, and will launch on PC, PlayStation 5, and Xbox Series consoles.

“We are particularly excited about the future release of Ghostrunner 2,” says Raffaele Galante, co-CEO of Digital Bros, of which 505 Games is a subsidiary. “Together with One More Level, we have created a thrilling and engaging video game.” He also says that he hopes Ghostrunner 2 will be “capable of satisfying the tastes of the entire gaming community.”

New-gen players have even more to look forward to now, as the “next-gen update” for the first game is already scheduled for release this year. With the sequel developed with new-gen in mind, there will be countless more opportunities to utilise the DualSense’s adaptive triggers or make the best of Xbox’s Quick Resume feature to play Ghostrunner 2 alongside the latest Xbox Game Pass titles without losing any progress.

We are thrilled to inform the Ghostrunner community that Ghostrunner 2 has been announced!

You can read more details about this massive announcement below. More details will follow soon.

Join us at https://t.co/5UagraKOtB to discuss this announcement with the community. pic.twitter.com/jJmoAVzVf8

505 has kept quiet about any tentative release date or even an official title for Ghostrunner 2, but as the One More Level gets further through development we’ll keep you updated with any news about the cyberpunk sequel.