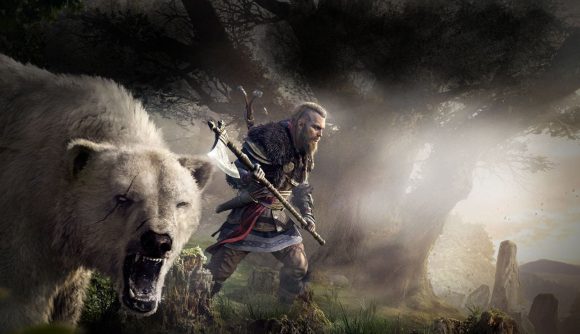 Assassin’s Creed Valhalla’s patch 1.2.1 has dropped, fixing a long list of bugs affecting AI, quests, boats, and combat. However, there are a few surprise entries in the patch notes, including a few instances regarding the behaviour of animals in certain situations.

The first of which involves the Bash skill. If you’ve unlocked the skill, you’ll know exactly how it works. Hold RT, and run directly at your enemies to give them a big old bash, effectively shoulder barging them out of the way. However, you could never afford the wildlife the same courtesy. Until now. Yesterday’s patch says that “all animals will be reacting accordingly to the Bash ability,” meaning that you should now be able to Bash them. Why you’d actually want to do something so cruel to their adorable faces is beyond us, but if the inability to Bash animals was one of your main gripes about the sprawling RPG, then this patch may change your fortunes.

If you’re more of an animal-lover, however, then another bug fix could be to your tastes. Have you ever felt gutted when you’ve been following a lovely cow, squirrel, or puffin for miles, only to enter a dialogue cutscene and the poor critter disappears? Just me?

Well, that no longer happens after patch, so your little friend will continue to walk, waddle, or otherwise romp through the background of your cutscene, providing an adorable backdrop for whatever Viking-based conversation you’re having at the time.

Other improvements include fixing floating objects – we’d noticed some salmon ominously floating above the river they would usually be swimming in – and made sure that Eivor can enter buildings that have objects in the way.

The biggest change in the patch is the addition of three new skills: Cold Rage, Eye of the North, and Intense Rage. Cold Rage is a combat perk that lets Eivor ignore hit interruptions while performing successive regular melee attacks, and Intense Rage ignores them while performing your next off-hand parry or special attack. On the other hand, Eye of the North is an ability for players who have built an archer-version of Eivor, which prevents flinching while aiming their bow.