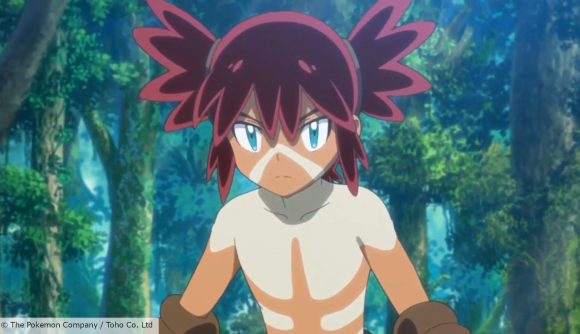 The Pokémon Company has revealed a promotional card for the Pokémon TCG that is the third ever creature card that isn’t a Pokémon. As highlighted by Serebii’s Joe Merrick, this card joins both a Japanese promo card (M Sachko EX) and a card from the Skyridge set (Buried Fossil) to get this unique distinction.

The new promo card is called ‘Coco’ and is being released to coincide with Pokémon the Movie: Coco, which follows wannabe Pokémon master Ash Ketchum as he encounters a mysterious young boy named Coco in a jungle. This boy has a similar backstory to Tarzan, or Mowgli from the jungle book, as Coco was raised by a Zarude, a new mythical Pokémon, who wears a pink cape.

While Zarude will have the Dark and Grass Pokémon types in the games when it is eventually released worldwide to Pokémon Sword and Shield, Coco is a Grass-type Pokémon card. Since he was raised by a Pokémon, it makes perfect sense for him to appear as a Pokémon card.

As for the Pokémon card itself, it’s a bit of a mixed bag. Coco has 90 HP and he has one really good attack and one very bad one.

So, in case you didn’t see, they’re releasing the third ever publicly released Pokémon card featuring a non-Pokémon and the second to actually be playable since Buried Fossil in Skyridge back in 2002 pic.twitter.com/mKfEX81KSb

For those of us who can’t read Japanese, Coco’s attacks do the following (cheers to Pokeguardian and immewnity for the translation):

If your deck is running very specific Grass-type Pokémon, then Coco is great at being able to fish them out so you can pop them onto your bench. But while Tarzan Kick’s 120 damage is nothing to sniff at, the chance that he’ll miss is just too much of an ask for quite an expensive attack.

This promo card will likely be given out as a bonus for going to see Pokémon the Movie: Coco, which is slated to air in Japanese cinemas on December 25, but there are currently no plans for an international release.