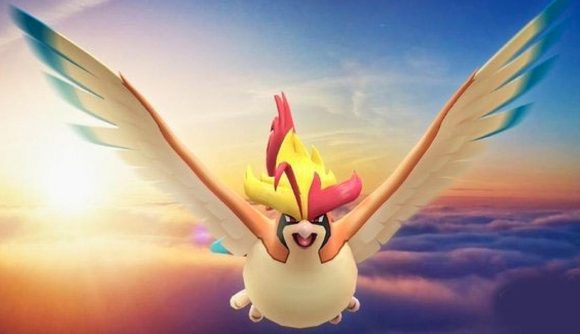 Pidgeot has been disabled in Pokémon GO Battle League, the mobile game’s PvP mode, developer Niantic announced this morning. The developer says it is investigating “ongoing issues” with the Pokémon, however it maintains that the ban is temporary.

Pidgeot is the only Pokémon that can learn Feather Dance, the Flying-type move that has been introduced for GO Battle League Season 8, which seems to be the cause of the issues. Occasionally Feather Dance causes an opponent’s game to crash, which appears to be why Pidgeot has been temporarily disabled in PvP. Feather Dance does decent damage but is guaranteed to drop your opponent’s attack by two stages – regardless if they use a shield or not – so it could well become a meta move provided Niantic fixes any bugs. Some players, including YouTuber ‘Zyonik,’ have gone as far as calling the move “overpowered” and “broken.”

GO Battle League Season 8 also buffs no fewer than five Poison-type moves, likely to combat the rising Fairy-type meta. However, we still expect to see plenty of Azumarill dominating the Great League, as well as new entrant Shadow Granbull whose Charms will be 20% more devastating courtesy of its Team Rocket power ups.

Pidgeot is not one of the best Pokémon in Pokémon GO, but it’s a nice off-meta pick that has versatility in quite a few matchups – especially when utilising Feather Dance and exclusive fast move Gust.

Trainers, as we investigate ongoing issues, Pidgeot has been temporarily removed from GO Battle League.

Niantic hasn’t given us a roadmap of when the issue will be fixed, but as Feather Dance is only available on Pidgeot at the moment, it won’t impact most players’ Great League teams. However, if you’re one of the people who has spent an Elite Fast TM and a hatful of stardust on powering up a perfect Pidgeot, then Niantic is working on a solution.

Players can still use Pidgeot in raids, PvE battles, and battles with friends (although be warned, your friend’s game may crash if you try the latter).