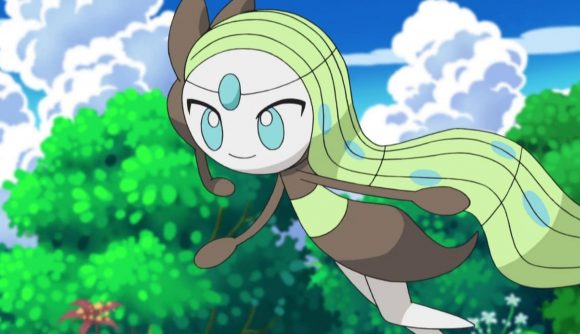 Pokémon GO Fest 2021 has been announced as a two-day event this summer, happening on July 17-18. While Niantic has offered players very few details about the annual celebration of all things Pokémon, we believe that the developer has left some subtle hints about the mythical Pokémon Meloetta in its blog post.

First of all, some background about Meloetta: the Generation V Pokémon debuted in Pokémon Black and White, and is classified as the Melody Pokémon. In its Aria form – which we expect to debut in Pokémon GO, as the game has a habit of releasing secondary forms at later dates – its hair is an iconic green colour. A green that is very similar to the banner in the GO Fest 2021 banner.

Furthermore, Meloetta’s Pokédex entries reference its singing, which has the power to control emotions and has inspired “many famous songs.” Perhaps Meloetta inspired Post Malone’s anniversary-celebrating Pokémon tune? Either way, the mythical Pokémon is the series’ most musical monster since Jigglypuff, and the eagle-eyed among you may have noticed the musical notes adorning the GO Fest 2021 logo.

In addition to the quavers adorning the event banner, the blog post tells players to “stay tuned for more details,” emphatic italics provided by Niantic. So maybe we were wrong about the hints being subtle, but we firmly believe Meloetta’s Pokémon GO debut is on the way.

Previous mythical Pokémon such as Mew have been made available through special research obtained by buying a GO Fest ticket, which usually costs around $14.99 (£11.99). We don’t expect this to change for 2021’s anniversary edition, which celebrates 25 years of Pokémon and five years of GO.

We don’t know whether Meloetta will be one of the best Pokémon in Pokémon GO, but mythicals are usually banned from PvP events so you will be limited to using it in raids or non-competitive matches against your friends.