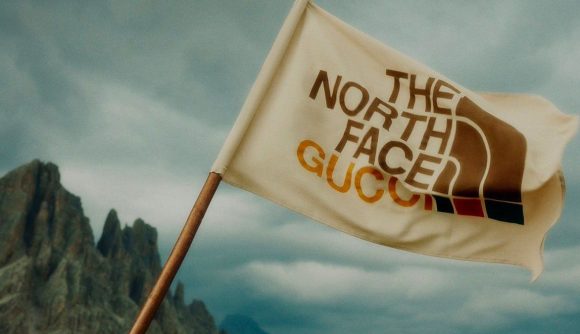 New year, new drip. The Pokémon GO collaboration with Gucci and North Face is now live in-game for players in Japan and Italy. During the event, players will be able to spin sponsored PokéStops to receive in-game cosmetic items.

The clothing items in question are a bucket hat, a backpack, and a t-shirt. The IRL North Face x Gucci collaboration range has already been released, and includes the t-shirt and backpack that are available in Pokémon GO. However, players are still expecting a Pokémon-specific item to be available in the real-life range. At this stage, however, none of the companies involved have specified either way. But, the hat available in-game does not appear to be in the North Face x Gucci collection at the moment, so that could be revealed in the future.

Niantic has previously partnered with Longchamp and Uniqlo for similar events, so the latest fashion collab shouldn’t be too much of a surprise. However, the fact that a world-renowned brand such as Gucci is willing to collaborate with a mobile game, albeit one of the most successful mobile games, shows how much Pokémon GO has grown as a game and a brand.

It’ll be a little while yet before Generation 8 Pokémon are released in Pokémon GO but if you cop some of the sponsored gear now, you’ll be ready for a Grookey/Gucci combination when the time comes.

The sponsored PokéStops and items seem to be slowly releasing in more countries. At first, they were only available in Japan, but now have been found in Italy also. We’ll keep this story updated when we know more about the items’ release in the rest of the world – and when you can get your hands on their physical counterparts.

UPDATE: All 100 PokéStops are now live worldwide, residing in 75 cities. If you’re lucky enough to live near one of the cities mentioned in the official blog, you’ll be able to get your hands on the in-game gear. However, it doesn’t seem like any Pokémon gear will hit the IRL shelves.