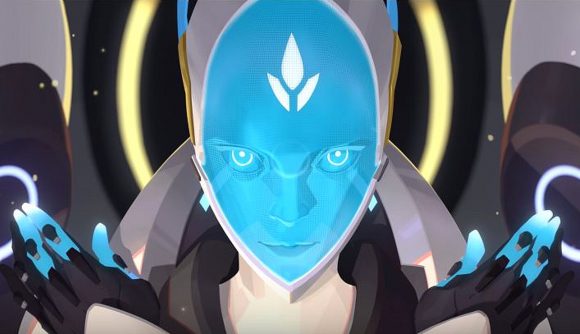 Overwatch’s newest hero, Echo, has been shown off to the game’s fans – and she has a pretty insane ultimate.

Echo, who was first teased way back in 2018, had her origin story released yesterday which fleshed out her lore and place in the Overwatch world. But now, thanks to a reveal stream on Twitch with Tim ‘TimTheTatman’ Betar and Blizzard vice president Jeff Kaplan, we know what role Echo will be and how her abilities work. Echo will be a DPS hero with a base HP of 200, who has fast aerial mobility. Ability wise, she has no defensive abilities, and is instead an all out attacker.

Her primary ability shoots laser-like projectiles which deal 17 damage each but deal more for headshots. Her alternate attack is a ‘sticky bomb’ that deals damage to enemies within a blast zone. Then there’s her ‘Focusing Beam’ which deals “crazy amounts of damage” to already weakened targets. According to Kaplan, it does 50 base damage but even more to enemies and barriers that are below half health.

But it’s her ult where things get real interesting and, potentially, game-changing. Echo’s ult, ‘Duplicate,’ allows her to transform into any enemy hero (so long as they’re in her line of sight), granting her their abilities. But while in Duplicate, these abilities charge “650%” quicker, meaning you can potentially cram two or three of another hero’s ultimates into one single Echo ult.

Another cool feature is that Echo’s character model will physically transform into the champion you’ve duplicated, but with a blue, digital hue to it. The quotes and phrases heroes call out when using their abilities are also picked up by Echo and said in her voice.

Echo has certainly sent Overwatch fans into a bit of a spin, with TimTheTatman’s chat and social media going crazy at her unexpected ult.

TimTheTatman’s stream was crammed with eager fans and recorded the highest viewership ever on his channel, peaking at 131,000 viewers.