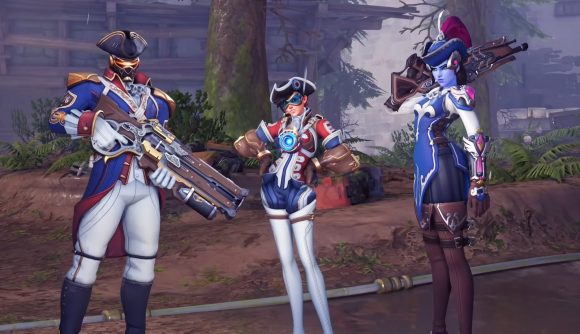 The annual Overwatch Archives event has now gone live, with players now able to access classic co-op story missions with “deadly new twists”. Throughout the event – which runs from April 6 to April 27 – players will be able to earn all sorts of goodies, “including skins inspired by historical outfits of war.”

Alongside the Archives story missions: Uprising, Retribution, and Storm Rising, a host of new challenge missions have been added. For Uprising, the ‘Bulletproof Barriers’ mission makes, as the name suggests, enemy barriers invulnerable. For Retribution, ‘Sympathy Gains’ will require careful enemy pack management, as damaging enemies heals others. For Storm Rising, players will have to watch how close they get to each other, as ‘Thunderstorm’ makes it so that “enemies damage all nearby players.”

2021’s Archives event also promises eight new skins – five of which are legendary, the other three epic. The Legendary skins – Bushi Genji, Cavalry Tracer, Mousquetaire Widowmaker, Polyanitsa Zarya, and Soldier: 1776 – can all be attained through Archives loot boxes. These boxes can be earned throughout the event, or bought with real currency. Meanwhile, Corredor Lucio, Subaquatic Zenyata, and Camouflage Mercy can all be earned through the revised reward system.

The system itself works based on stars, which are awarded by taking on and completing Archives missions. Playing on a higher difficulty or clearing Challenge Missions will give extra stars. Each week throughout the event, players will be able to earn one of the three epic skins if they can accrue 30 stars, with a corresponding icon and spray unlocked en route at 10 and 20 stars respectively.

Lúcio coming at you! 🔊

Pick up red-hot rewards, including Corredor Lúcio (Epic), during the first week of the Archives Event! pic.twitter.com/Opc926y2wc

With the 2021 Overwatch Archives event already underway, players better be quick to jump in and start earning those stars before the first week is out.