Competitive gaming is serious business. In top titles like Counter-Strike: Global Offensive, Valorant, and Rainbow Six: Siege, the difference between you clutching out a round and getting clapped can be a matter of milliseconds. Nvidia Reflex, team green’s proprietary software, claims to shave away precious milliseconds of system latency for those with a 900 series-plus Nvidia GPU, and while I bought into its efficacy, I never realised just how dramatic the difference is between a system with and without it actually is.

That was until I was invited down to an event co-hosted by Nvidia itself alongside British esports organisation and lifestyle brand Excel Esports. Tucked away down a quiet street in Shoreditch, London, Excel’s shiny new office space is coming along nicely ahead of its grand opening later this month. Within it awaited four challenges for the plucky bunch of journalists invited, including some intense 1v1s against two of the highest-level players Excel had on-hand.

Reflex, as senior technical product manager Rick Napier explained to us in the opening presentation, cracks down on the time it takes for keyboard and mouse inputs to reach your PC, your PC to render the game you’re playing, and the speed at which that image is displayed on the screen.

On a Reflex-enabled system, Napier says that things like hit registration and flick shot accuracy will be improved, while that pesky peeker’s advantage is mitigated – a bold trio of claims to be sure. Nvidia’s website says players can expect system latency as low as 25ms with Reflex alone, and that’s without considering the further drops in latency apparently achievable with a high-end Nvidia GPU churning out high framerates. 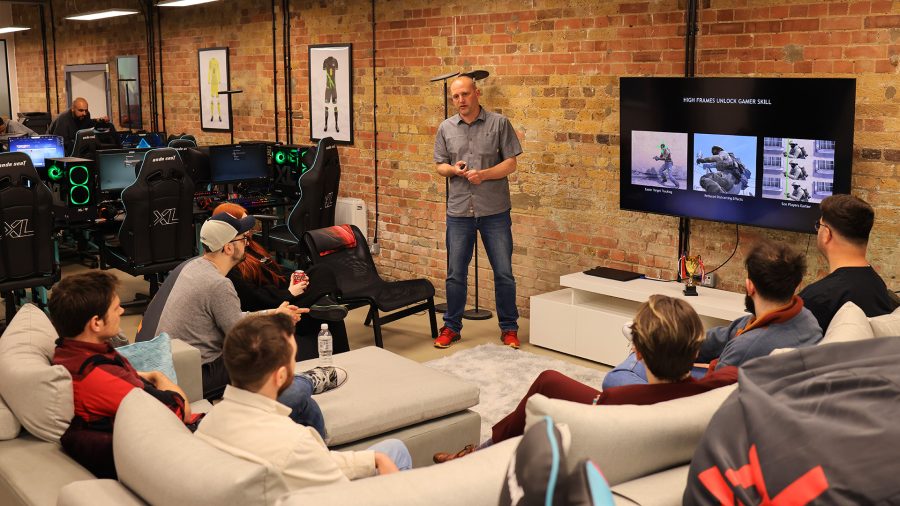 We were then introduced to our challenges for the day, as well as the suite of systems we would be competing (if you could call it that) on. Top end rigs – which touted the RTX 3070 Ti – were matched with Reflex-infused peripherals, while the lesser rigs – which incorporated the GTX 950 – were attached to mice and monitors which didn’t have dedicated Reflex support.

Two of these challenges pitted us against Excel talent manager Freeman Williams – a Fortnite maestro – and assistant Valorant coach Sam ‘Fields’ Greenfield – a one-tap king – in 1v1 scenarios on their respective shooters – with the participants rotating between the lower and higher-end systems.

Needless to say, most of us (myself included) got destroyed, but not without getting one or two good shots in. The most important thing, however, is that I noted a marked improvement in my score between the lower and high-end setups, though this could have simply been due to other factors like improved visual clarity on the better rig helping me find my target more-easily.

Fortunately, there was a high-end setup running a special version of KovaaK’s aim training software we could use to get a more granular impression of Reflex itself. Here, we were tasked to shoot down targets over three rounds, each with increasing latency added to the game.

This is the task which shocked me the most as I was, on average, shooting an extra 20 targets at the lowest latency (20ms) compared to the highest (85ms). My average at low latency was somewhere around 110, while I struggled to hit above 90 at high latency – it genuinely felt like I was moving my mouse through sludge. 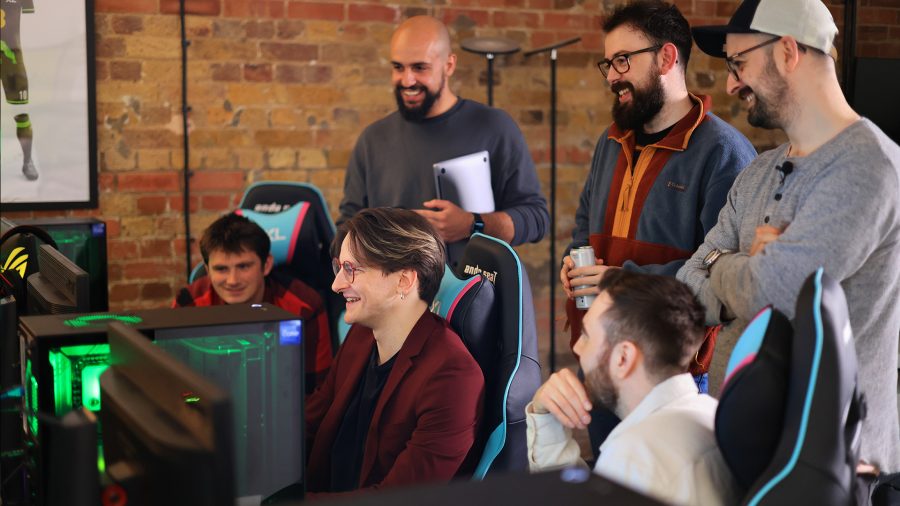 The smallest observed change came through beating the snot out of one of God of War’s Valkyries. In a scenario where I was up against an NPC rather than a human player, I didn’t really notice much difference between the two systems (I even managed to beat the Valkyrie on the lesser system – a feat I couldn’t reproduce on the better one).

Perhaps in games with tighter timings when it comes to things like dodging – Elden Ring being an obvious example – there may be a more pronounced difference, but that remains to be seen.

Indeed, for competitive gaming, Nvidia’s Reflex tech is the real deal. Even 65ms of latency was enough of a difference to completely throw off my already-paltry aim in the KovaaK’s test, and without the advantage gained in the 1v1 challenges I fell at the hands of Excel’s aimers far, far more times than my broken pride will allow me to admit.

Currently, Reflex is supported on every Nvidia GPU from the GTX 950 all the way up to its latest and greatest offerings. While 3000 series cards will benefit the most from it, even low-to-mid-end builds will feel its effects. For competitive FPS games, Reflex won’t fix your poor aim, but it will certainly give you an edge over other players at your level with systems unable to take full advantage of its software magic.