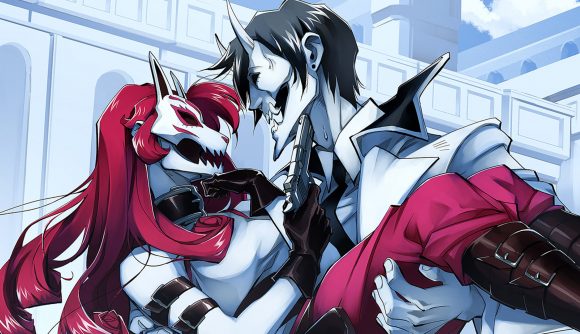 Neon White’s cast of lovable assassins from hell represent a strong array of character tropes. Lead developer Ben Esposito recently told The Loadout that each character – from the charismatic sword nerd White, to the cute-but-psychotic Violet – was meticulously crafted by co-lead Geneva Hodgson to be “a classic version of that particular archetype”.

Of course, writing stereotype-indulging characters is one thing, but bringing them to life requires the skills of top voice acting talent – and for the game’s titular character Esposito says the “first person on the list” Hodgson and himself had in mind was none other than voice acting royalty Steve Blum.

Perhaps best known for his role as Spike Spiegel in the English dub of cult classic anime Cowboy Bebop, Blum holds hundreds of credits to his name, across multiple media types, spanning a 40-plus-year career. Notable gaming roles include Vincent Valentine (Dirge of Cerberus: Final Fantasy VII), and more recently Brimstone (Valorant). Indeed, Blum is very much a legend in his own right and, as Esposito notes, was the perfect fit for what the Angel Matrix team wanted to achieve.

“Steve is an amazing choice for so many reasons,” Esposito begins. “Not only is he just enormously talented, and can read a line amazingly the first time, the second time, and the third time, but to a certain audience he represents a particular era that we were trying to invoke. So he just made so much sense across the board.”

For the anime-loving ‘freaks’ Neon White is heavily marketed towards – those who look to revel in the imperfect nostalgia of a bygone era of gaming – Blum certainly is a dream choice. Keep an eye out for our full chat with Ben Esposito when it arrives on the site later this week.