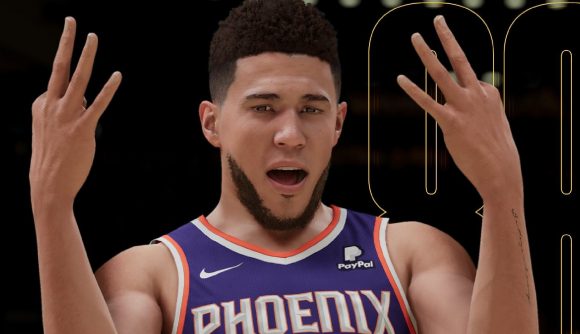 NBA 2K fans have been left waiting longer than usual for news on this year’s entry. But after 2K teased some reveals at the end of June, it appears that the cover athlete for NBA 2K23 has been revealed and it appears to be the Suns’ Devin Booker.

As reported by Shams Charania, a senior insider of the NBA for The Athletic, Devin Booker will star on the cover of NBA 2K23, according to their sources. This news was revealed during the NBA draft season when the star is also reportedly planning to sign a four-year, $214 million contract extension with the Phoenix Suns.

Having debuted in the NBA in 2015, Booker has really shone during the last season, leading the Suns to one of their best seasons in the last 15 years. A fast point-scorer, Booker has helped turn the Suns around and put them in a good position going into the 2022-2023 season. He is also the son of basketball player Melvin Booker.

We don’t yet know which edition of the game Devin Booker will take the cover of, however, it will most likely be the standard edition. NBA 2K23 will most likely have multiple cover athletes for the pricier editions of the game, as they have done in other years.

The Phoenix Suns and All-NBA guard Devin Booker are finalizing a four-year, $214 million supermax contract extension that he’s set to sign as soon as next week, sources tell @TheAthletic @Stadium.

Booker will also be the cover athlete for NBA 2K23, per sources.

The NBA 2K23 release date is most likely going to be set for early September, and 2K has teased more reveals soon. So, we should get a confirmation about Booker’s appearance on the cover within the next few weeks!