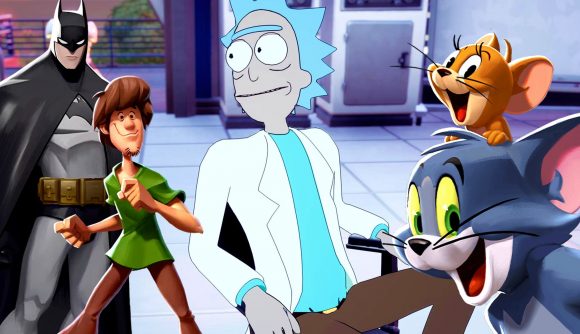 The crazy crossovers in WB Games’ upcoming free-to-play platform fighter MultiVersus just keep getting crazier. New MultiVersus character roster leaks suggest that iconic characters like Rick and Morty, Godzilla, and Space Jam 2’s LeBron James will be available at launch. The datamined information, which was collated by Redditor ‘White_Mantra’, also lists a number of other characters that we could see thrown into the MultiVersus roster at a later date.

Ahead of the MultiVersus open beta, developer Player First Games has shared quite a few of the faces fans can expect to see grace the MultiVersus roster at launch. These include DC Comics’ Batman and Superman, Game of Thrones’ Arya Stark, Looney Tunes’ Bugs Bunny, and even The Iron Giant. Now, though, it looks like players can expect to see a few more familiar faces in-game at launch – and beyond.

The datamined information, which you can see for yourself below, lists the following characters with codenames: LeBron James, Marvin the Martian, Rick Sanchez, Morty Smith, Gizmo and Stripe. These codenames suggest that the characters will be available in-game at launch.

In addition to this selection, the MultiVersus character leaks also suggest that the following characters will be appearing in-game at some point, with some already having in-game taunts available:

From what we can tell, characters from The Lord of the Rings, DC Comics, and Game of Thrones will all be introduced alongside iconic figures like The Wizard of Oz’s Wicked Witch of The West and Stranger Things’ Eleven. There are a few names in the list that could mean a number of things, like “Ninja” and “Brute”.

For now, there’s no telling which characters we could see using these datamined names. If you’re curious to learn more about the roster we do know about, you can check out the latest on the MultiVersus voice actors cast right here. It has also already been announced that EVO 2022 has added a $100,000 MultiVersus 2v2 tournament to the schedule.