If you’re wanting to set up a bee farm in Minecraft, you’re probably wondering how to get honeycomb in Minecraft. This isn’t a craftable item and it can be a little tricky to obtain if you don’t know what you’re doing. However, since honeycomb has multiple purposes in the game, it’s extremely useful to know how to get your hands on it.

Honeycombs were added to Minecraft Bedrock with the 1.14.0 update and to Java with the 1.15 update. With the update came a handful of honey-related items that have since been added to and expanded upon.

Thankfully, learning how to get honeycomb in Minecraft is pretty simple, and the process is easily repeatable. All you’ll need are a few items to get started, but just like in real life, you’ll need to be careful not to make the bees angry.

How to get honeycomb

To get honeycomb in Minecraft, you need will need two things: a pair of shears and a bee nest/beehive. This is the only way to get honeycomb, and it cannot be crafted.

Before you go out hunting for a bee nest, make sure you have a pair of shears ready to go. You can craft these by placing two iron ingots into a crafting table.

Next, you’ll need to hunt down a bee nest. They are located on trees and are found in the meadow biome. These are the grassy biomes filled with flowers and animals.

Before you can get the honeycomb from a bee nest, it needs to be at honey level 5. A nest’s honey level will increase when the bees return with pollen. During the daytime, if it’s not raining, the bees will leave the nest and search for pollen. They’ll return at night or during the rain, and if they have pollen, it’ll increase the honey level by one. Unfortunately, there isn’t an exact amount of time that it takes to get honeycomb, and you can’t speed up the pollination process.

Once the nest is dripping honey, you’ll know it’s ready to be harvested. Simply use your shears on the nest and you’ll get three honeycomb. However, beware, the bees will chase you until they are able to sting you. Once stung, your health will decrease and you’ll be temporarily poisoned.

It’s also worth mentioning that a bee nest will not be destroyed when you get honeycomb from it and you can come back for more once it’s back to honey level 5.

How to get honeycomb without being attacked

If you’d prefer to get honeycomb without being attacked, you can place a campfire underneath the bee nest. The smoke from the fire will calm the bees and keep them from stinging you.

Getting honeycomb with a campfire is an easy way to avoid being attacked and is definitely worth it since they’re easy to build. Just be sure that you place it directly below the bee nest so that the smoke can reach the bees.

How to automatically farm honeycomb

If you want to set up a honeycomb farm, you can use a dispenser with a redstone signal. Simply place your shears in the dispenser so that it’s facing the beehive or bee nest and it will automatically get the honeycomb from the hive once it’s ready.

It’s important to note a few things though. The honeycomb will not go inside the dispenser, so you’ll need to come back and collect it from the ground. Also, the dispenser will not anger the bees, so you don’t need to place a campfire underneath it. 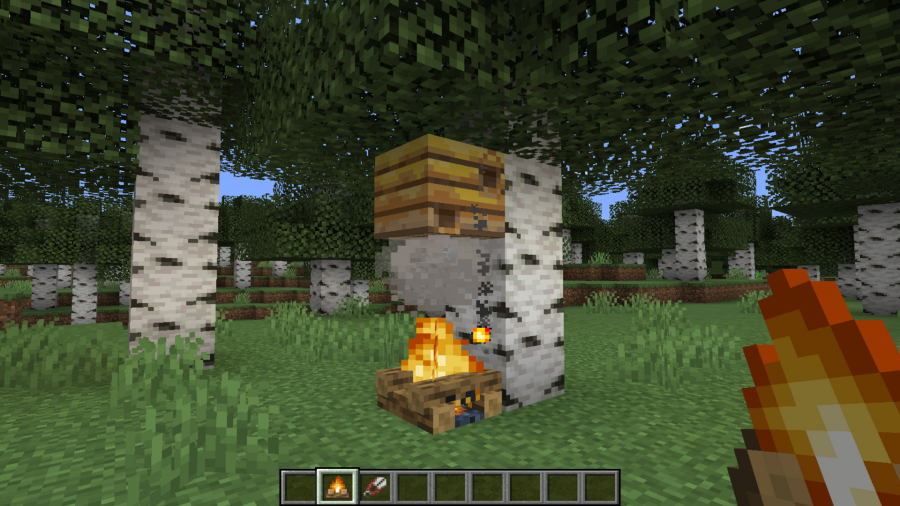 How to Use Honeycomb

In Minecraft, honeycomb can be used to craft beehives, candles, honeycomb blocks, and waxed copper.

If you want to farm honeycombs, the best thing to do is set up a handful of beehives. The only difference between beehives and bee nests is that the nests are auto-generated and beehives are a craftable item. You can get Honeycomb from each in the same way.

To craft a beehive, you’ll need six planks and three honeycomb. Open your crafting table and place three of any type of plank on the top row, followed by three honeycomb on the middle row, and three more planks on the bottom row. This will give you a beehive, which you can use to start farming honeycombs.

Candles are simply used as a light source and can be crafted at a crafting table with one honeycomb and one string. Place the honeycomb in the middle of the table and a string above it, and you’ll get a candle.

Honeycomb blocks are simply decorative pieces that can add a bit of variety to your house ideas. Simply place four honeycomb in a 2×2 square inside a crafting table and you’ll make a honeycomb block.

Lastly, honeycombs can be used to make a waxed block of copper, which will prevent it from oxidizing. In the middle row of your crafting table, simply place a block of copper and then a honeycomb and you’ll make an oxidized version of it. You can do this with copper blocks, slabs, and stairs.

Now that you know how to get honeycomb in Minecraft, you can set up a nice little farm and start crafting all sorts of fun items in your Minecraft survival server.

Andrew Smith is a games journalist whose work can be seen at IGN, GameSpot, GamesRadar, and more. He knows his stuff about games like Fortnite, Elden Ring, and more.