Firaxis Games’ Marvel’s Midnight Suns is bringing together some of Earth’s Mightiest Heroes and powerful beings from the Marvel Comics universe to battle against Lilith, the Mother of all Demons, and a selection of the biggest villains out there. Of course, there are hundreds of Marvel characters for Firaxis Games to choose from when it comes to putting together a roster, but there’s only space for a handful of them. So, if you’re wondering who’s made it into the Marvel’s Midnight Suns characters list, you’re in the right place.

This upcoming tactical RPG largely puts players into the role of The Hunter – a mysterious new hero debuting as one of the most important characters in the Marvel’s Midnight Suns characters list. As the child of Lilith, legend says that The Hunter is the only being strong enough to truly stop her. Thankfully, they won’t have to do it alone.

If you’re looking for a few more recognisable faces, you’ll be pleased to know that iconic heroes like Captain America and Iron Man will feature in this superhero adventure. Of course, you might find that you don’t recognise a couple of the characters on the list below, but this guide should help you get familiar with them in time for launch.

Right now, Firaxis Games has confirmed that there will be a total of 13 playable characters available in Marvel’s Midnight Suns at launch – with one of those being The Hunter. We don’t know everyone else who’s making the cut, but a few faces have been confirmed.

With that in mind, here are all the Marvel’s Midnight Suns characters we know about so far: 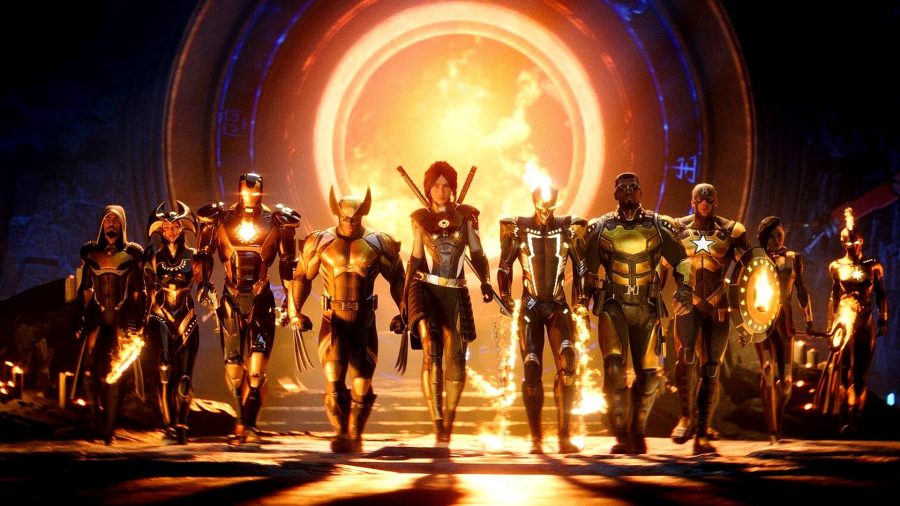 Blade, real name Eric Brooks, is easily the most prominent (and perhaps the most effective) vampire slayer in the Marvel Comics universe. Whenever there’s a problem with Dracula’s bloodsucking brood, Blade is the best place to turn. That doesn’t mean he isn’t a capable combatant against other supernatural threats though, so Lilith and her demonic army better watch out. He’s a skilled martial artist, a deft hand with firearms, and a perfect member of the Marvel’s Midnight Suns team.

Captain America, real name Steve Rogers, isn’t a face you see fighting alongside Marvel Comics’ Midnight Sons too often – but, that doesn’t mean he keeps himself out of harm’s way. Wherever there’s danger and a villain that needs beating, you’ll find Captain America and his shield. He’s a central part of almost every major event in the Marvel Comics’ universe and should provide important leadership – and a solid right hook – in the fight against Lilith.

Captain Marvel, also known as Carol Danvers, is a cosmic powerhouse widely regarded as one of the toughest heroes in the Marvel Comics universe. Much like Captain America, you don’t often see her fighting alongside the Midnight Sons against supernatural threats, but she’s also another character that finds herself in an important leadership role when it comes to major events in the Marvel Comics.

Doctor Strange, first name Stephen, is a master of the Mystic Arts and easily one of the most prominent sorcerers in the Marvel Comics Universe. Often portrayed as the Sorcerer Supreme of his Earth, Doctor Strange can sling spells and create illusions with the best of them. He’s also an established member of Marvel Comics’ Midnight Sons – so, he knows his way around a supernatural threat. Lilith doesn’t stand a chance with Doctor Strange involved.

Ghost Rider, who is actually Robbie Reyes this time around, isn’t necessarily a character you’d associate with Marvel Comics’ Midnight Sons – but, Robbie is doing things differently to Johnny Blaze, his predecessor. Blaze embodied the Spirit of Vengeance, sure, but Reyes is using that Spirit for more than that – his Hell chains are undoubtedly a welcome asset in the fight against Lilith. Oh, and he also has a Hell Charger – because motorbikes are so last Ghost Rider, right?

Iron Man, also known as Tony Stark, is often referred to as Earth’s Greatest Defender – and it’s clear to see why. With a high-tech suit of armour, one of the smartest brains in the Marvel Comics universe, and an unmatchable ego, he’s going to give Lilith a run for her money in Marvel’s Midnight Suns. He might not be one you associate with the Midnight Sons often, but much like Captain America and Captain Marvel, he’s often front-and-centre in any major event in the Marvel Comics universe. It makes sense that he’d be brushing shoulders with Blade and Nico Minoru here.

Magik, real name Illyana Rasputina, is the mutant sorceress sister of X-Men’s Colossus. In the Marvel Comics universe, she’s often portrayed as the all-powerful ruler of the demonic realm known as Limbo. We don’t know who this will play into the narrative of Marvel’s Midnight Suns, but she’s one of the ‘big guns’ when it comes to sorcery in the Marvel universe. So, the fact that she’s been convinced to join the fight against Lilith tells you a lot about just how serious the threat she poses is.

Nico Minoru, who you may also see referenced to as Sister Grimm, is another powerful sorceress from the Marvel Comics universe – however, she deals with Blood Magic a lot of the time, making her an interesting asset to the team being thrown together in Marvel’s Midnight Suns. Without professional training, Nico relies on the Staff of One for a lot of her spell-slinging. This can make her somewhat unpredictable, as the Staff of One doesn’t always play along – but, it looks like she’s much more capable in Marvel’s Midnight Suns than she was in the early days as one of Marvel Comics’ Runaways.

Wanda Maximoff, the infamous Scarlet Witch, is a controversial character in the Marvel Comics universe – often dancing the fine line between hero and villain, however intentional or unintentional that may be. Despite her actions in the Marvel Comics universe, she’s usually a character people can rely on. She’s also one of the most powerful magic users out there, so bringing her onside to tackle Lilith and her demons is certainly something that makes sense. Just… be careful of her, okay? She’s been known to… Oh, remove almost a million mutants of their powers. No biggie.

It wouldn’t really be a Marvel game without everyone’s friendly neighbourhood web-slinger, would it? Spider-Man, also known as Peter Parker, is always eager to help out when there’s danger afoot. As one of the smarter heroes in the Marvel Comics universe, he’s not just a pair of hands in red spandex – Spider-Man can be a capable asset and, with Marvel’s Midnight Suns also giving players the chance to interact with characters outside of the battlefield, a good friend too. We can’t wait to see more of him in action ahead of Marvel’s Midnight Suns release date.

Do we really need to introduce this icon of the Marvel Comics’ universe? Wolverine, known as James “Logan” Howlett is a short king – and one of the toughest heroes out there. With a strong regenerative healing factor and an Adamantium skeleton (thanks, Weapon X program), Wolverine doesn’t go down easy. He may be an integral part of Charles Xavier’s X-Men, but he’s always getting stuck into the biggest fights in the Marvel Comics universe – so, it wouldn’t really be a complete roster in Marvel’s Midnight Suns without him.