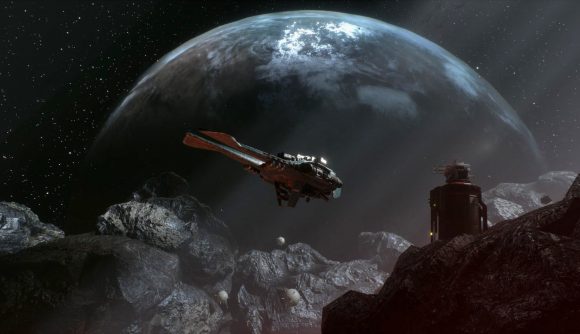 The last time we spoke with Small Impact Games, the developers behind Marauders, the team were confident they were at the “precipice of a new genre”. Extraction shooters like Escape From Tarkov, Hunt: Showdown, and Vigor had long been knocking on the door of mainstream success and Small Impact wanted a slice of the pie. Fast forward a couple of months, and it seems the studio’s predictions are looking good, with Marauders’ first closed alpha surpassing all expectations.

The alpha, which was available to anyone who pre-ordered the game on Steam, was open for just six days, from May 4-9. During that time, thousands of players flooded the servers – overloading them on the first day – in a bid to take to the skies in their very own spaceship and loot the hell out of floating raid locations.

“It was stressful but crazy exciting at the same time,” James Rowbotham, lead designer, tells The Loadout. “It proved to be a lot bigger than we expected – three times that, actually – but the game held up really well, people seemed to find it fun, and loads of people streamed it.”

While Small Impact and Team17 remained coy on the actual numbers involved, it’s clear that internally the alpha is being viewed as a huge success, especially since the feedback received aligns with the team’s ambitions.

“We’re influenced by extraction genre games, so it was nice to hear people thought we stood out as a game against Escape From Tarkov and that sort of thing,” Rowbotham says. “They were saying the game is its own thing and that’s exactly what we want it to be.”

“And the stuff people want is generally very aligned with our direction. I think that shows that the game, the theme, and the mechanics are strong enough as they are – so people want to lean into the other bits, like ships, maps, and customisation.”

So that’s exactly where Small Impact is putting resources into. Both Rowbotham and Cameron Small note they’ve got plenty of new additions in the works, like new ships, additional customisation, and improve player progression and prestige systems – something that should be visible by the time the next Marauders alpha rolls around.

We still don’t have a date for that just yet, but with the Marauders release date looming, and the fact that the player base is already chomping at the bit for another chance to explore space, it shouldn’t be too long before we can get back in the Rust Bucket again.