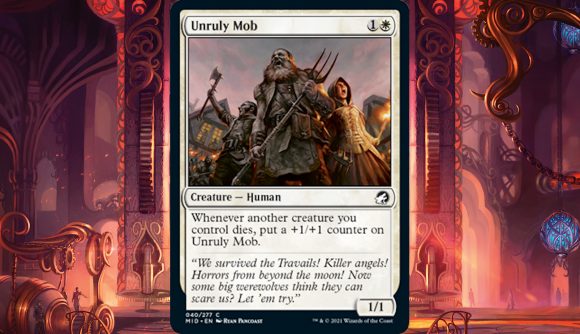 Magic: The Gathering’s upcoming expansion, Innistrad: Midnight Hunt, will see Wizards of the Coast flip the calendar back a full decade, as the MTG team looks to restore the plane of Innistrad to a time “where horror monsters from classic horror films are menacing humanity.” That’s right, Innistrad’s sixth set will be far more macabre, without an angel in sight.

In keeping with there being lots of gothic beasties like werewolves scurrying about the place, Midnight Hunt will see the return of transforming double-faced cards – though this isn’t the only mechanic making a comeback. Flashback – a keyword ability that allows you to pay an alternate cost to use instants and sorceries directly from the graveyard – will also be present in the new set.

Indeed, Midnight Hunt looks to be filled to the brim with throwbacks, and today’s exclusive card reveal is no exception. Allow us to reintroduce Unruly Mob – a common human creature from both the original Innistrad set, as well as Shadows over Innistrad, which costs one white mana to summon.

Although these particularly unwelcoming locals don’t seem all that threatening with their 1/1 statline, don’t be fooled as Unruly Mob’s main effect allows them to quickly scale. As the rules text states, “whenever another creature you control dies, put a +1/+1 counter on Unruly Mob.” Basically, if anything the mob holds dear to it dies around it, they will sharpen their pitchforks and light their torches, before trampling over the opposing board.

As such, drafting around the mob will allow it to flourish. The most common deck types we’ve seen Unruly Mob utilised in revolve around either scaling low-stat creatures and tokens with the likes of Ghave, Guru of Spores, or ones which sacrifice creatures in order to activate effects. For the latter, Teysa Karlov would serve as a fine commander.

While Unruly Mob isn’t the glitziest card in the new set, it has the potential to become an absolute beast. Perhaps not quite a werewolf, but pretty darn scary nonetheless. If you’re hungry for more card reveals from the new set, then check out Howl of the Hunt, Pestilent Wolf, Snarling Wolf over Wargamer and Festival Crasher on PCGamesN.