Inspiration comes in a variety of forms. For Todd Sitrin, who runs EA’s Competitive Gaming Division, that includes the Great British Bake Off, Project Runway, and James Corden.

Sitrin is hoping EA can reshape the field of esports, adding a more welcoming, less hardcore option to the eight hour long, tactics-heavy shooter broadcasts which have defined esports since the beginning. While the plan is not to replace the classic esports approach, Sitrin and EA are looking to offer something extra. “You’re fishing in a lake where everybody has been fishing for 21 years,” Sitrin says “maybe it’s time to go to another lake and see if there are fish there.”

So far, the fish have been biting. Over 115,000 people watched Trent Alexander-Arnold play Vinicius Junior in the FIFA Stay and Play Cup, while EA’s Sims based reality show, The Sims Spark’d, averaged 769,000 viewers across its TBS premieres on ELEAGUE. Both were aimed at widening the audience, and now EA is looking to build on that success.

Accoring to Sitrin, the main priority right now is trying to establish something based in esports which doesn’t follow any of the set rules. “I think it’s called esports because they looked at traditional sports and just said ‘we’re gonna mimic that, but electronically’.

“I would say that virtually every execution [of esports competition] to date has played out of the exact same playbook. They’ve always been focused primarily on strategy and shooter games, they’ve been a male dominated form of entertainment, both in terms of the participants and the viewers, and it’s been very long competitions that go on for eight hours at a time, always on digital outlets like Twitch, and always presented with one model being used, which is the traditional sports presentation model.”

This, Sitrin says, is where some of that inspiration comes in. “We decided to look outside the esports industry and think ‘what are other models of competition that are interesting?’. And there are many. We’re inspired by the Great British Bake Off, American Idol, X Factor, America’s Got Talent… they’re all rooted in authentic competition, but it’s a different way of getting to the competition,” Sitrin says.

“Another one we looked at was Project Runway. It’s a bunch of people that are challenged to create different fashion. We have [The Sims] which is all about creating people and buildings and storylines, and we thought ‘that’s pretty similar’. That opens up a much, much bigger audience for viewership of competitive gaming.” 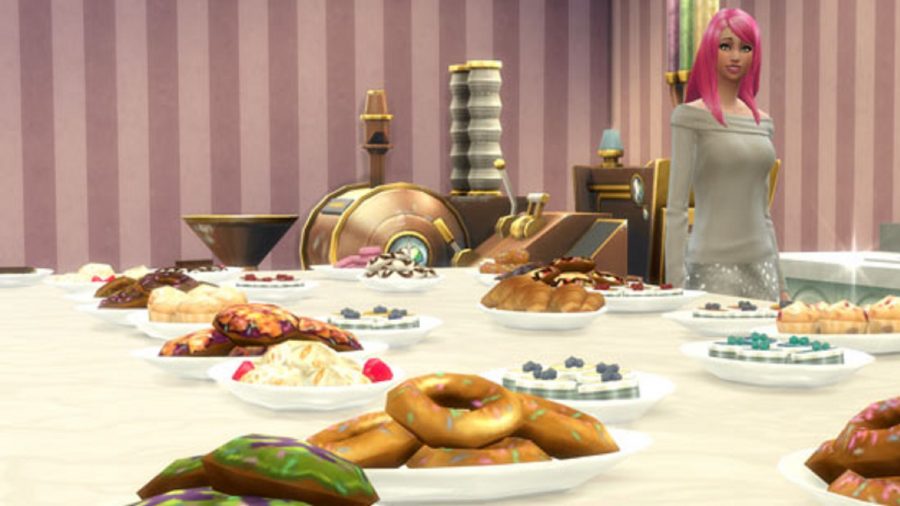 This idea of a bigger, broader audience is key to what EA is doing here. Success for a broadcasting company is measured primarily by eyeballs on the screen, but more than that, Sitrin senses an opportunity to build something new. While Apex Legends will remain largely in a classic esports format, the Competitive Gaming Division is focused on bringing in completely new people by offering things never before seen in high level esports.

“Historically, the vast majority of people who currently are watching esports are actual players of the game that they are watching. It’s become limiting because you’re only getting a subset of those that already play your game,” Sitrin explains. “Part of that is the games are really narrow that have risen to the top, and they’re pretty hardcore. Dota 2, League of Legends, Overwatch. We want to create an entertainment property that is interesting enough that even if you aren’t a player of that particular franchise, or maybe not even a gamer at all, you will still find enjoyment out of it.

“Going back to Great British Bake Off, I don’t bake, I don’t even cook, but I am sucked into that because it’s based on the storylines of interesting people doing interesting things. It isn’t a requirement that you be a player in order to be a viewer, and we want to go in that direction.”

It isn’t a requirement that you be a player in order to be a viewer, and we want to go in that direction

Part of hunting out this new audience has been looking in a completely different place for it; hence the lake analogy. “There are audiences out there who are different to the audience who lives on Twitch,” Sitrin says, “We went to Buzzfeed Multiplayer for The Sims Spark’d, because we feel their audience are closer to the type of audience we’re putting out than Twitch or even YouTube were.” Spark’d was also broadcast on Turner affiliated television stations in North America.

As well as challenging the traditional esports platforms, EA is drastically cutting down runtimes, changing from the typical six-eight hour broadcasts to under an hour. The way Sitrin sees it though, EA isn’t out of step with esports, it’s esports that’s out of step with the rest of popular entertainment.

“When you think about all non-videogame entertainment, it’s all relatively short. I mean, people consider a movie long if it’s over two hours. People look at baseball and go ‘three and a half hours? I’m not gonna watch that.’ So even when you look at game shows, they’re 30 minutes. The Sims Spark’d was 44 minutes of content per episode, and we think it’s not about length, it’s about interest and impact.”

Where does James Corden fit into all this though? If you’ve ever had Corden’s face covering your YouTube suggestions, you might have already guessed.

Related: How NASCAR made the overnight switch to esports

“Look at somebody like James Corden,” Sitrin says. “Hugely popular, hugely successful, he has a television show that I think runs for an hour, and what he’ll say is what gave him fame and an audience was a five minute Carpool Karaoke segment. That was distributed digitally and people love that. It didn’t need to be an hour long, it just needed to be really good content people would resonate with.”

Sitrin says Corden’s methodology is essential to EA’s new direction, and that his style of using a longer broadcast to create smaller, more digestible segments to post online is where EA’s Competitive Gaming Division is heading.

“We’re thinking of these module competitions, which might in totality be an hour or two hours, but maybe they get parsed out in a way that they can be consumed in a five or ten minute time frame so it resonates more with a Gen Z or Gen Alpha audience.”

This reshaping of content to fit the audience might not stop with just cutting up existing competition either, but could result in further truncation down the line, if that’s what viewers want to see. “There’s no doubt that [Gen Z and Gen Alpha] want to consume shorter and shorter time frames for their content, so we’re already looking at ‘what does a 15 minute competition look like?’, ‘what does a ten minute competition look like?’ because I think that’s where things will go.”

Sitrin also feels like EA’s back catalogue lends itself more to challenging the status quo, because it features more relatable and understandable concepts than the current top esports. “With sport, people already know the rules of the game, they know the players, they know the teams, and that lowers the barrier to entry for something new,” Sitrin says, highlighting how FIFA and Madden can help extend their reach, adding, “The Sims was chosen because if you’ve lived a life, you understand The Sims. Accessibility is where we think [our esports] will go.

Sitrin does not expect every new experiment to work out, however. You don’t always catch the fish. “The word ‘innovation’ means to do something other people have not done before, that inherently means it’s somewhat impossible to know if it will be a success or not. We like that feeling, that energy of ‘will it work or will it not?’.”

EA’s plan is definitely innovative for the esports space, but does seem to be largely following patterns established by television shows and YouTube content creators at the moment. It remains to be seen whether this new direction can alter the course of esports long term, but for now, this new lake seems to have led to a very successful fishing trip.