Can you ever truly empathise with someone, even if you had the power to read and affect their feelings? Well, this is the question posed by developer Deck Nine in the Life is Strange series’ latest instalment, Life is Strange: True Colors. Doing away with the episodic entries of its predecessors, True Colors grants players full control over narrative progress for the first time – though we have a feeling most will become too engrossed to not binge this five-part drama.

True Colors kicks off with protagonist Alex Chen’s arrival in Haven Springs, Colorado. After eight years apart, Alex has finally escaped the foster care system, and reunites with her estranged brother Gabe. Although the years crawled by for Alex – who we can tell has had a rough time of it by the text messages stored on her phone – the pair quickly get past the initial awkwardness and resume their sibling shenanigans as if they’d never been parted. The dynamic between Alex and Gabe is sickly in its goofiness, but is devoid of some of the almost Tumblr-esque cringe that crept into previous instalments – a line which is successfully toed throughout Alex’s story.

We are then swiftly introduced to the majority of True Colors’ main cast, as Gabe excitedly gives us a whistle-stop tour of the main points of interest you’ll spend most of your time visiting throughout Haven. It’s a linear experience, with the majority of it taking place on a single street. However, this tiny world leaves a huge impression on Alex, and left an equally-large impression on myself.

Haven itself is, quite frankly, stunning. A picturesque little mining town buried deep in the Coloradan mountains, there are few stages more visually pleasing that True Colors’ events could unfold on. It’s a rustic paradise, with the local flora and fauna heavily-entwined with the town’s human footprint. Honestly, it’d be unsurprising if Haven’s demographic makeup was more moose than man.

But, of course, it isn’t a Life is Strange game without a big old helping of tragedy, as Gabe dies in a freak accident shortly after Alex arrives in town. Left alone in an unfamiliar environment, Alex begins investigating the death of the last remaining bond from her old life, and it quickly transpires that Gabe’s passing isn’t as accidental as it first appears. It’s a classic small town mystery, with Deck Nine taking a leaf out of Life is Strange developer DONTNOD’s playbook. 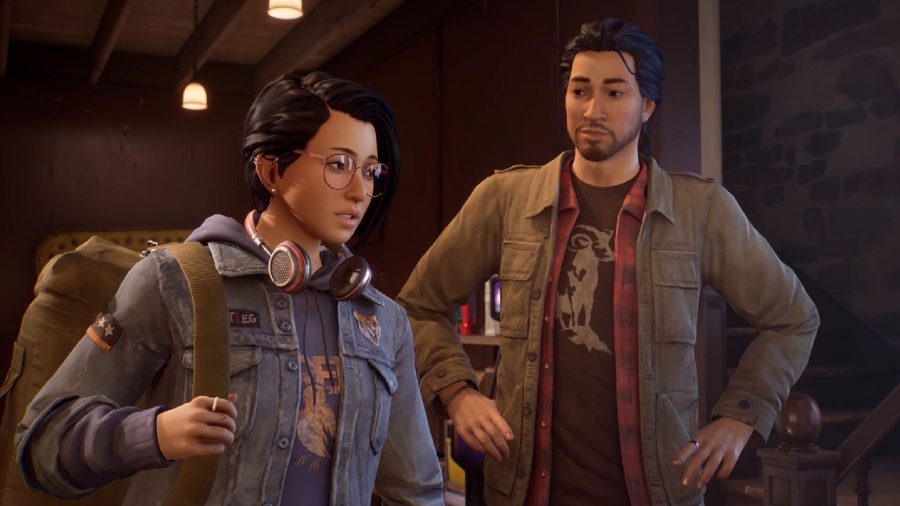 Although Alex doesn’t have much to go off of, fortunately she has a supernatural power that comes in handy throughout her journey. Alex’s power is rooted in empathy, and allows her to tell what others are thinking, among other things, by tapping into their strong emotional auras. While it may not be as glitzy as the powers wielded by the series’ previous protagonists, I feel like this iteration – based on how elegantly it compliments Alex’s character – is the series’ best implementation yet.

The great irony of Alex’s character is that, despite having the most tumultuous of relationships with people growing up, she is the person most-capable of understanding how they feel. It’s a constant tug of war between the bonds she craves but never seems to be able to form, and the bonds she’s shackled to by her power that she’d much rather be without. Fortunately, this cycle begins to break, with Gabe’s death being the unlikeliest of catalysts.

Alex quickly finds herself befriending the majority of the game’s cast, and deepens her relationships with Steph – a rocker chick and local radio DJ who dreams of getting back on the road – and Ryan, who is the flannel-clad human embodiment of a golden retriever. The pair also serve as Alex’s potential love interests throughout, though just how far you wish to blossom romance is down to you and the decisions you make. 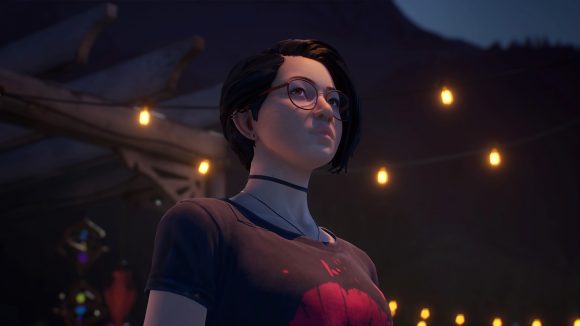 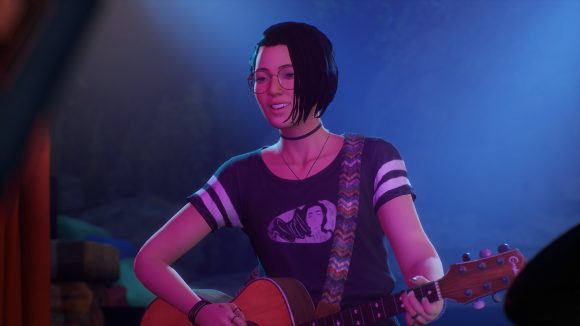 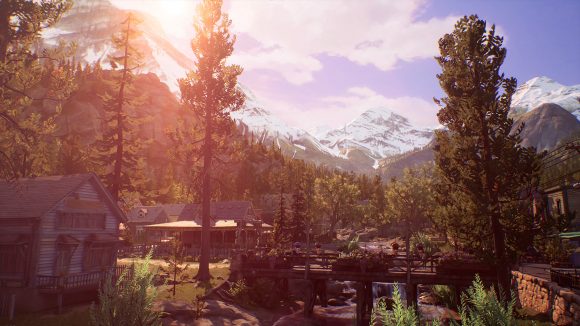 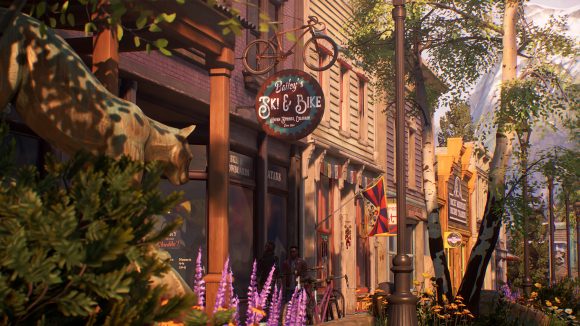 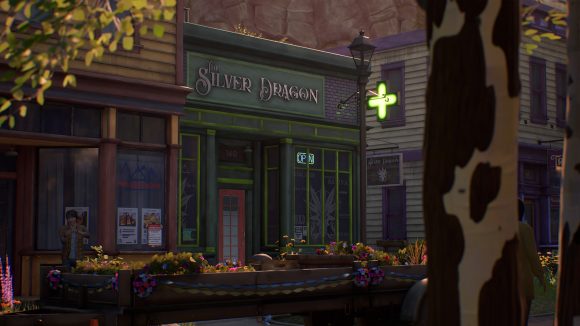 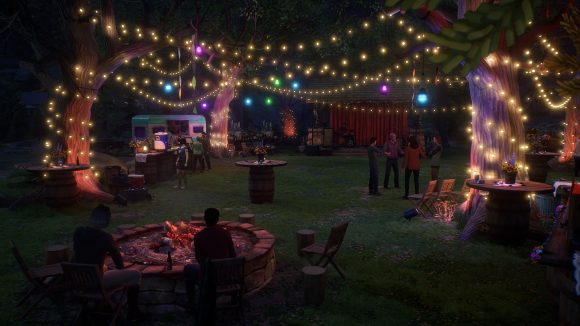 Opting for romance is just one of the many choices, both menial and grandiose, that Alex must make throughout her journey. Talking to one character may unlock dialogue options with another, as can fully-exploring even the tiniest details within your new home. Major choices might not have an immediate knock-on, but further down the line they can have you kicking yourself for not opting for the alternative. True Colors’ moral choices feel impactful, and it’s especially gutting when what you thought was best for someone eventually works against you. Even with powerful skills of empathy, humans are still remarkably complex creatures that are impossible to read.

Even with powerful skills of empathy, humans are still remarkably complex

Making these decisions becomes even more difficult when there is so much on the line for each character. Every member of the game’s cast undergoes their own trial throughout, with the stakes in some cases being uncomfortably high. It’s partly for this reason that I can so confidently praise how well True Colors’ characters are written – they truly feel like ordinary people who are placed into extraordinary circumstances, and I found myself completely invested in their arcs emotionally.

These emotions are only heightened by some fantastic musical choices. True Colors’ soundtrack is well up to the standard of what we’ve come to expect from the series. Blending indie bops, folk sections, synthy electronica, and even slightly more raucous rock tunes, there’s a lot to like about it. Angus & Julia Stone’s massive contribution creates a beautiful soundscape within Haven, and married with the exquisite environmental design makes me feel nostalgic for a place that doesn’t even exist. 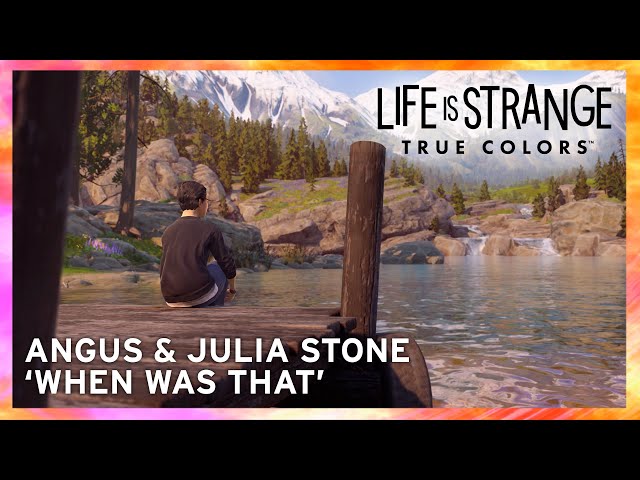 The other factor which really makes it easy to sink into Haven’s linear world is just how good the series’ visual fidelity has become. When even the tiniest details, like an old polaroid here or a loose sticky note there, can open up a new dialogue option or have the memories tied to them explored (achievement and trophy hunters, prepare yourselves), it’s critical to keep things crisp – something Deck Nine has done a great job of.

Unfortunately, the technical side of things is where True Colors briefly falters. Despite running on Sony’s new-gen PlayStation 5 hardware, I was often met with surprisingly long (at times up to ten seconds) loading screens between scenes, and there were occasionally small graphical foibles – including a T-pose – which detracted at times from the overall immersion.

On the flip side, the DualSense controller’s haptic implementation works very well. There’s only so much that can be done in a narrative adventure such as this, but the trigger feedback as you resonate with a character’s aura does well to enhance the weight of what they’re feeling. Additionally, there’s hugging haptics, which needs no explanation really – it makes me very happy. It seems odd that there’d be controller feedback for a simple hug, but considering it’s become a pretty alien concept to Alex as a victim of a broken foster system, it’s natural that auras aren’t the only otherworldly feedback we’re subjected to.

It really is these small details that make me truly appreciate the love and care that has gone into True Colors’ development – from how they flesh out the town of Haven to how they help us identify with its cast. Every text message sent and social post shared on the community’s page further helps inform the image of Haven and its community, though whether or not that image properly reflects its true colours will be for you to experience. 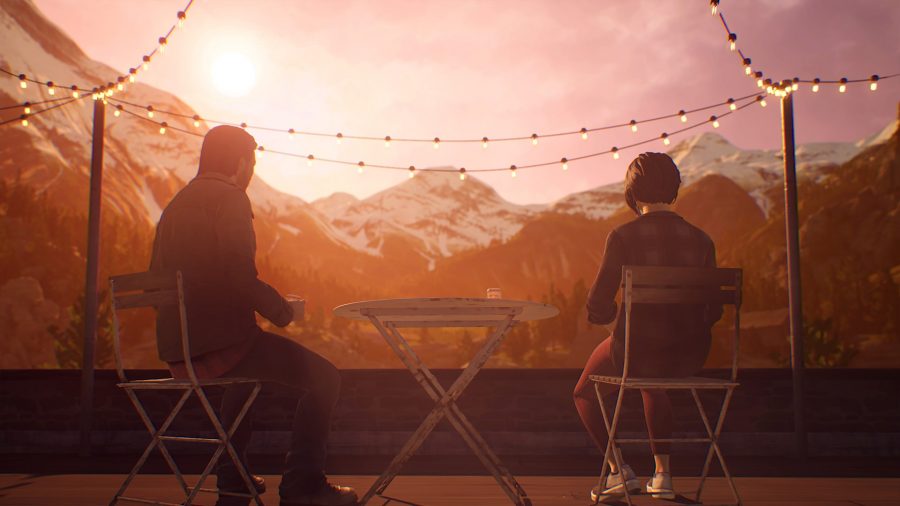 Indeed, True Colors is fraught with twists and turns that will either supercharge your brain with serotonin, or leave you feeling very emotionally compromised. It is a story of breaking cycles and building bridges, of love, of loss, and what comes after. 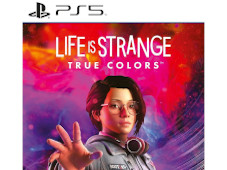 It’s the tale of a single mother desperately trying to raise her son on her own as best she can after her partner’s death and the tale of a man who fears losing his partner. These are only examples of the narrative strands that are all interwoven with that of a 21 year-old woman trying to uncover the mysterious circumstances behind her brother’s death. It’s raw, and at times difficult, but I’m so glad I got to experience them.

Life is Strange: True Colors is a game I’m going to be thinking about for a long time. I don’t know how Deck Nine managed to cram so much of the human experience into that small Coloradan mining town, but it certainly managed to pull it off in the series’ most refined instalment yet. Although the story begins with Gabe as the glue which binds its starring cast together, by its conclusion it is Alex who has left the biggest imprint on Haven’s residents – for better or for worse.

Life is Strange: True Colors sets a new bar for the series. Deck Nine does a stellar job of exploring painful topics that evoke true emotion both in-game and out, using its cast of well-written characters and set pieces, all packaged within a gorgeous environment and a beautiful soundscape.