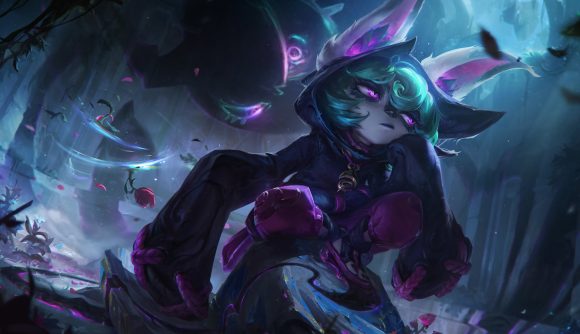 We’ve known for some time that Vex would be making her debut on Summoner’s Rift. After all, the moody yordle featured heavily during the recent Sentinels of Light event, appearing as one of Viego’s advisors. Now, Riot Games has given us a better look at the upcoming champion with a brand new trailer.

The trailer kicks off with a whimsically Disney-esque outlook of the Rift, with wild gromps and skippy Zoes roaming the map without a care in the world. Gross. Fortunately, Vex arrives to neutralise the mood, sending a blast wave at the Aspect of Twilight to send her back to the fountain – “that’s better.”

As for the rest of Vex’s kit, we can see that there’s two types of fear-inducing AoE blasts: one which is instantaneous and stems from Vex herself, and the other which can be placed a distance away, though there’s a delay on its activation. This could be the same ability, albeit with two ways to use it, but we shall see. Additionally, the self-cast blast appears to give Vex some sort of shield.

As for her ultimate ability, it looks like Vex is able to fire her shadow out, allowing her to shift over to the first champion hit. Should a champion be taken down, it appears that the ultimate resets, allowing Vex to home in on consecutive targets.

While Vex appears to hate anything remotely positive, that’s not to say she’s against forming bonds with other champions. “You’re sad and dead? We should hang out,” she says to Amumu. Finally, the Sad Mummy has a friend – we sobbed.

Vex is intended to be played in the mid lane, but who knows where she’ll ultimately end up? After all, with the ability to home in on and fear targets, we could see her played in the jungle – if her numbers are decent enough, of course.