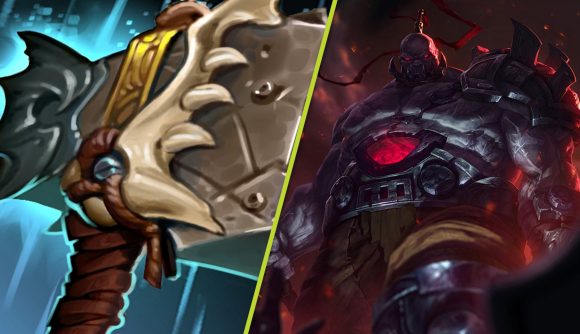 League of Legends patch 12.9 changes are already hitting the Public Beta Environment (PBE), with tweaks to Olaf, Pyke, Sion, and Taliyah already out in the wild. However, Riot Games has now filled out its patch preview for the next update with further champion changes, as well as another nerf for Hullbreaker.

Game balance & preseason lead Matt ‘Phroxzon’ Leung-Harrison took to Twitter last night to share the barebones rundown for LoL patch 12.9, which includes buffs for Braum, Hecarim, Thresh, and Varus, and nerfs to Ahri, Master Yi, Nidalee, Renata Glasc, and Rengar, alongside the first wave of tweaks to Olaf, Pyke, Sion, and Taliyah which already hit the PBE last week. He also notes that there will be some changes to Renekton “to adjust his scaling over game time.”

[email protected] moderator ‘Spideraxe’ also took to Twitter last night to share updates on the latest round of PBE changes, which include a number of further alterations to Taliyah, a larger nerf to Sion’s zombie form turret damage, and details on what the fresh nerf to Hullbreaker’s passive entails.

According to the PBE, Hullbreaker will only deal increased damage to towers on champion attacks, whereas before all sources of damage (including abilities) benefitted. This looks to be a major blow to champions like Sion and Yorick who have been shredding through towers with Hullbreaker in-hand for some time now.

We're doing a large update to increase champion durability in Patch 12.10, so look out for the Quick Gameplay Thoughts on Friday!

Highlights are the Olaf and Taliyah changes that we're excited to finally get into your hands. pic.twitter.com/4JKDrLD2Nd

Although there isn’t a whole lot in the new patch, Phroxzon does note that this is intended due to the heftier durability changes which are coming in LoL patch 12.10. “The 12.10 changes are intended to increase durability, which has a greater effect on burstier champions”, he says. “We’re holding off on adjusting most of those champions this patch as a result.”

Though we’ll have to wait and see what 12.10 entails, we can at least take solace in the fact that we will be experiencing a few fewer Baus specials in our LoL ranks games in the meantime.