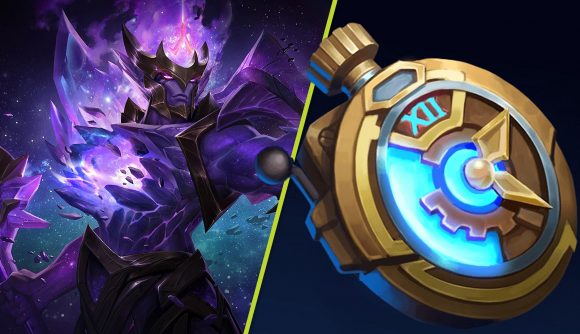 The League of Legends Mid-Season Invitational 2022’s meta is already set to look pretty different to what we’ve become accustomed to so far this year. With the last couple of patches making pretty major changes to both champions and items, the drafts we see in South Korea could be very spicy indeed. On the latest patch, LoL patch 12.8, Riot Games is set to continue the trend, and is making a huge change to one of the game’s most prevalent items in the current meta going into MSI 2022: Stopwatch.

Currently, it is possible for players to purchase additional Stopwatches despite owning one of its completed forms: Guardian Angel or Zhonya’s Hourglass. However, Riot says that “being able to use Stopwatch in addition to having its terminal items can lead to some pretty jarring game states and all around awkward moments.” As a result of this, the studio has now removed the ability to purchase more Stopwatches if you have either of its final iterations.

The potency of stasis has once again made Stopwatch and its associated items a mainstay in pro play this year. Throughout the latter half of the Spring Split, jungle picks like Jarvan IV and Volibear even started building Stopwatch items – particularly Zhonya’s – second after their Mythic.

In fact, tanky supports like Leona and Nautilus have often been spotted with these items – particularly in the LPL. In all cases, the value of stasis on lower-economy engaged-based champions seems to be valued more highly by the pros than investing into tank stats.

Although an additional Stopwatch is seldom purchased on top of its completed forms – Jeong ‘Chovy’ Jio-hoon snapping one up in game two of the 2022 LCK Spring Split Playoffs final against T1, alongside both Chen ‘Bin’ Ze-Bin and Huang ‘Wayward’ Ren-Xing in the 2022 LPL Spring Split Playoffs final being recent examples – Riot is clearly trying to curb any further adoption of stasis to this extent as we head into MSI 2022.

With time running out for this particular interaction, we’ll be pouring one out for it as we inch ever closer towards South Korea’s BEXCO arena and MSI 2022 next month.