League of Legends has a brand new melee marksman on the way in the form of Nilah, The Joy Unbound. Of course, we already knew that thanks to the champion trailer developer Riot Games dropped last week. What we didn’t know was the League of Legends Nilah release date and abilities, but Riot has now lifted the lid on the details fans have been eagerly awaiting.

According to Riot, Nilah is “a warrior ascetic from a distant land, seeking the world’s deadliest and most titanic opponents so she might challenge them with an unbreaking grin. Having won her power through an encounter with the long-imprisoned demon of joy, she has no emotions other than its unceasing jubilations – which she now uses as a weapon, drawing the demon’s prismatic, liquid form into her hand to defend the world from ancient threats long forgotten.”

The studio’s dream for Nilah is for her to “be the star of the team, cutting through teamfights and dealing massive amounts of damage”, all while being enhanced by her supporting allies. So, let’s get into all the details on our new bot lane star with the League of Legends Nilah release date, her abilities, and everything else revealed about her so far.

The League of Legends Nilah release date is July 13, 2022. Riot confirmed that the new champion will arrive on LoL patch 12.13 during a recent press briefing. 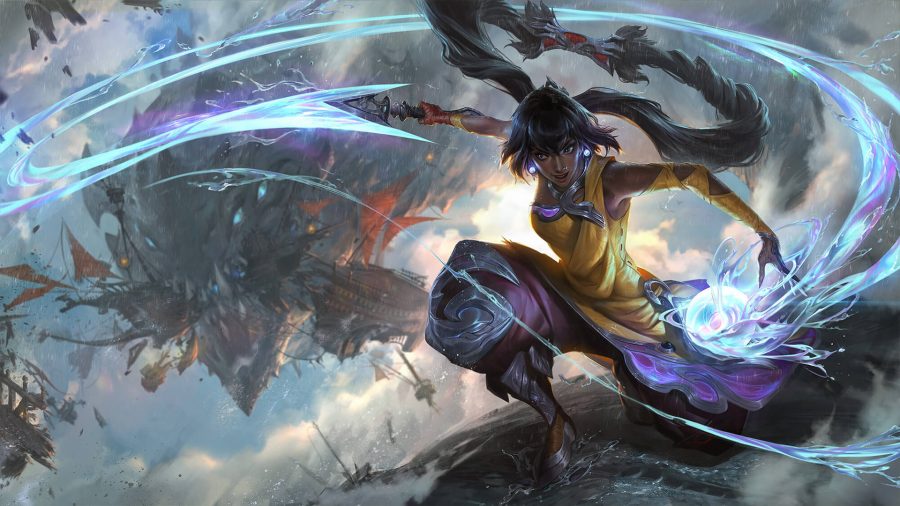 With a focus on skirmishing up close and personal, Nilah’s abilities offer her enough tools to survive traditional ranged matchups, while giving her and her support ample opportunity to trade back.

(P) Joy Unending – If Nilah last hits a minion she and the nearest allied champion gain 50% of the experience that would normally be lost from sharing with nearby allies.

Nilah gains additional effectiveness from heals and shields given to her by allied champions. When a nearby ally casts an ability that heals or shields Nilah or themselves, Nilah grants the additional benefit to both herself and her ally.

(Q) Formless Blade – Passive: Attacks and ability damage against champions ignore some of their armor and heal Nilah for part of the damage dealt. This effect scales with crit chance and can overheal, granting Nilah a shield

Active: Nilah strikes in a line, damaging all enemies hit. Hitting an enemy increases Nilah’s attack range and attack speed for a few seconds. Additionally her basic attacks will splash in a cone, dealing additional damage.

(W) Jubilant Veil – Nilah envelopes herself in mist, causing her to briefly gain movement speed, reduce incoming magic damage, and dodge all incoming basic attacks. Touching an ally champion hides them in the mist, granting them the same bonuses for half the duration.

(E) Slipstream – Nilah dashes through a target unit, damaging all enemies she passes through. Nilah can hold two charges of Slipstream at once.

Nilah can cast (Q) Formless Blade during Slipstream to pull a wave in her path, dealing damage and activating her empowered attacks.

(R) Apotheosis – Nilah spins her weapon in an area around her, dealing damage and pulling enemies in toward the centre with a final burst. This damage heals Nilah for a portion of the damage dealt, converting excel healing into a shield. The healing and shielding scales with critical strike chance and is shared with nearby allies.

So far, Riot has officially dropped a champion trailer revealing Nilah, and gives us a glimpse of her abilities in action 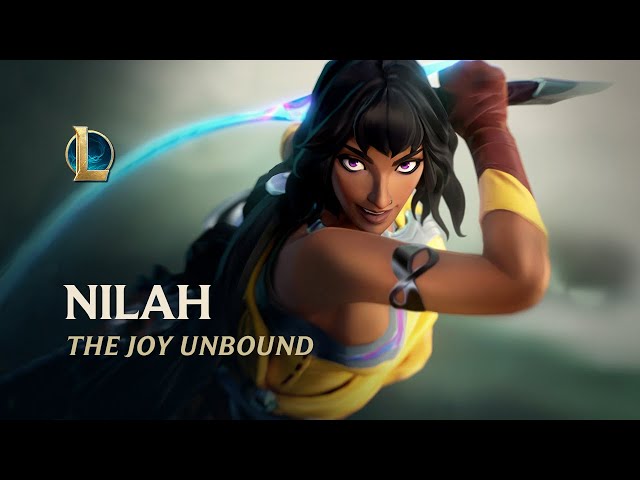 As part of a recent developer Q&A, lead gameplay designer Blake Smith says that, although Nilah shouldn’t be blind pickable outside of the bot lane, he does say that there may be matchups outside of it where Nilah can win out. By the looks of her kit, we can imagine Riot will be looking to balance her around her passive to ensure she mostly stays in the 2v2 lane.

Additionally, Smith states that, although Nilah will be best paired with an enchanter like Janna or Lulu due to how they interact with her own kit, she will be perfectly fine when played alongside a different style of support. Smith says with a chuckle that, while working on Nilah’s passive, she initially received copies of all positive buffs cast by her allies, but the studio tapered it down to just healing and shielding because it was too much. 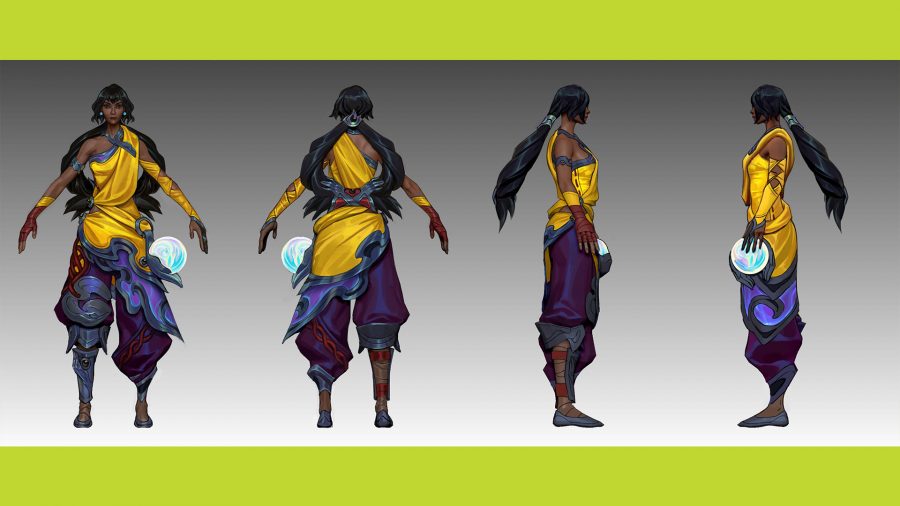 With regards to her weaknesses, the developer notes that Nilah struggles against classes that can continually harass her like mages. “She doesn’t have the greatest all-in potential that mages are normally weak to,” he says, “and they can put out a lot of damage since she’s closer in reach than them. This is where she needs to rely on her support to either zone off that person for her, or sustain her through it.

“Another weakness she has is that, being melee, she is a little more susceptible to some CC, so she can have a difficult time sometimes with tanks that can CC and disrupt her from doing what she wants.”

According to Smith, Nilah is a late-game champion who has a weaker early game than other skirmishers because the team doesn’t want her playstyle to devolve into constant all-ins from the get-go. “I don’t think she reaches the highest levels of damage like Vayne or something like that,” he says, “but she is high-damage late game, and she has a little more survivability than some of the other ones [high-damage marksmen].” 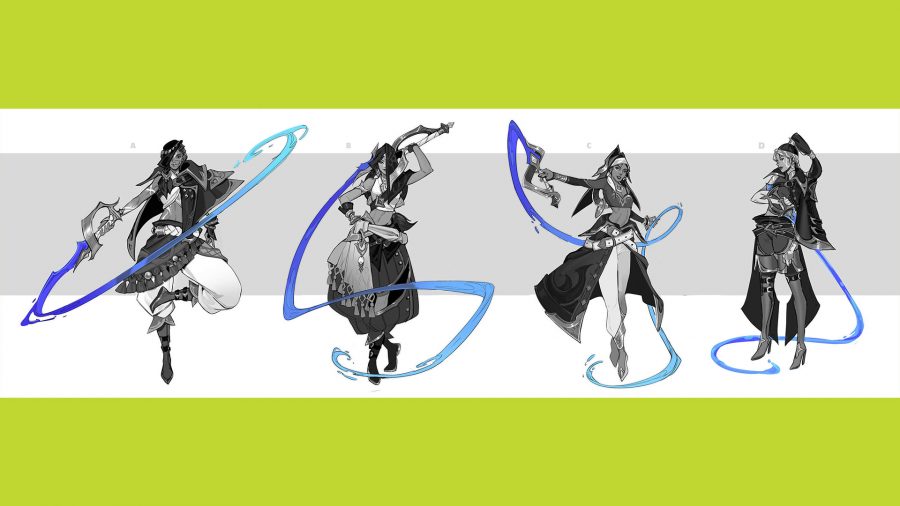 When it comes to pro play viability, Smith reckons she will mainly be picked when teams can build a comp around her, and won’t be a priority pick when the conditions to make her shine cannot be met.

“I think if she does get picked, it’ll likely be in specific teams that can really shore up her weaknesses and take advantage of her passive,” he says. “It’ll be interesting to see if pro teams might even go back to the old hyper-carry comps with multiple enchanters to make the character work.

Lead gameplay producer Ryan ‘Reav3’ Mireles notes that one of the goals for Nilah was to “do a champion that was designed for that role from the ground up for people who wanted something more unique”, having seen how popular skirmishers like Yasuo who are not endemic to the lane are.

Thematically, Nilah draws heavily on South Asian culture. Reav3 says that diversifying League’s roster culturally has been a “big goal” for the team in recent years. “Early on we got excited around this urumi water whip. We really wanted to do something South Asian-inspired, and once we had the team gravitating around that we looked for inspiration.” 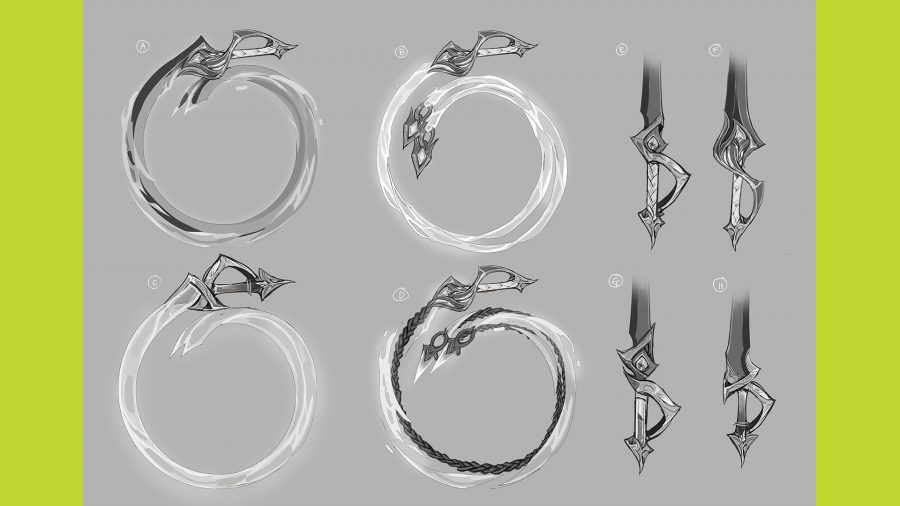 Nilah’s name naturally comes from those cultural influences, though with all of League’s champions, Reav3 says that the studio mixes in fantasy elements to produce something that is more Runeterran.

And that’s all we have on Nilah so far. With the League of Legends Nilah release date looming, we can’t wait to see how she fares in the current meta. With League’s champions more durable than before, we can imagine she will be incredibly potent if she can get up close and personal with her prey.