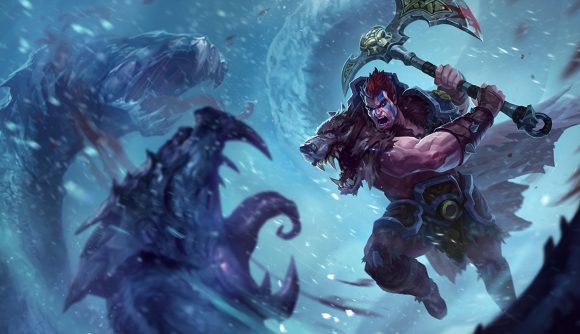 With most professional League of Legends leagues back underway after a short interlude following the end of the Mid-Season Invitational, Riot has decided to shake things up a bit. Gameplay design director Mark ‘Scruffy’ Yetter has shared the preview for the upcoming LoL patch 11.13, which seeks to tone down mobility creep.

Among the changes noted we are also introduced to two new items, Anathema’s Chains and Hullbreaker, which have already hit the PBE – tanks and split-pushers, you might want to stick around for this one.

Anathema’s Chains offers 650 Health, 20 Ability Haste, and the active effect ‘Vow’. Vow lets you choose a ‘Nemesis’ to start building a ‘Vendetta’ against over a 60 second period. When the Vendetta has been put into play, you’ll take up to 30% reduced damage from your Nemesis – 1% per Vendetta stack. Additionally, when at max stacks, your Nemesis has their Tenacity lowered by 20% while nearby. Not bad for a small 2,500 gold investment.

As for Hullbreaker – which is set to replace Sanguine Blade – for 2,800 gold you’ll net yourself 50 Attack Damage, 400 Health, 150% Base Health Regen, and the Boarding Party passive. With Hullbreaker in one of your item slots, you’ll gain 20-45 Armor and Magic Resist, as well as 20% increased damage to towers when no other allied champions are nearby. Jax and Nasus mains, this one’s for you.

This is a very big systems patch including the mobility reduction across a lot of systems and the additions of split push items for fighters and tanks. pic.twitter.com/hhC54Npi2B

But there’s more. With Boarding Party in effect, nearby large minions gain 60-135 Armor and Magic Resist, and a stonking 200% increased damage to towers. That’s right, Hullbreaker is very much Banner of Command’s spiritual successor.

Although we’re unlikely to see the new items make their way into pro play for a couple of weeks, we’re quietly confident that they’ll creep onto the Rift soon.