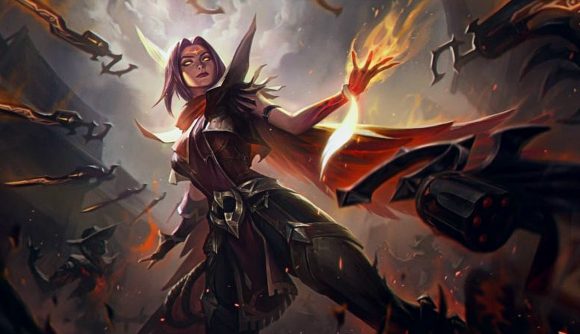 League of Legends patch 12.10 brings about one of the biggest gameplay changes we’ve seen in the MOBA for a while. The update’s main focus is on champion durability, and following an initial announcement earlier in the month, we know that the entire LoL roster would be getting a base health buff alongside various other changes. Now, thanks to the release of the patch notes on the PBE and comments from a Riot employee, we have a more precise idea of what will be getting tweaked in the update.

According to a graphic posted by League of Legends design team member ‘RiotPhlox’, 12.10 will grant all champions a base health increase of +70. Additionally, scaling values for health, armour, and magic resist will all be bumped up by 14, 1.2, and 0.8 respectively. To offset the bolstered durability, champion healing is being reduced by 10-28%, with champion shielding chopped down by 10% – *sad Aatrox noises*. Ultimately, these changes should help ensure players get a chance to react instead of being mercilessly one shot without any opportunity for counterplay.

As you can also see in the LoL patch 12.10 notes that have been posted to the PBE, dozens of items are getting tweaked as a result of the durability changes, and there are nine runes that are all getting nerfed, including Conqueror, Taste of Blood, and Triumph.

As well as finally getting access to the hard numbers for this update, RiotPhlox also discusses some of the decision making behind patch 12.10 and how it’s going to roll out.

“12.10 is a pretty massive patch, so we’re holding off on all [champion] balance changes for it,” they say. “We’ll have a much better sense of who needs to be nerfed or buffed after the patch is out. We’re expecting to do a balance micropatch the Thursday (US Time) of the patch.

Hey all!
Patch preview for 12.10, the champ durability update.

More context in followup tweets and the patch notes themselves. The TLDR is this is a pretty disruptive patch and we’ll be watching closely and ready to react.

“Wide sweeping changes like these just aren’t predictable enough for us to know which specific champ will be OP and by how much before release. It’s gonna be a fun time figuring out new builds and counters and all that though.”

League of Legends patch 12.10 is set to release on May 25, and that “micropatch” containing balancing changes for individual champions should follow the day after on May 26.