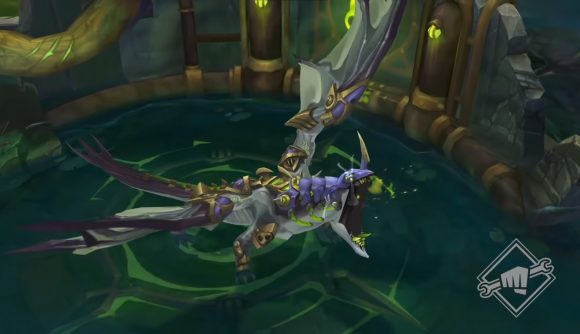 League of Legends developer Riot Games has announced that the Chemtech Drake has been disabled, following widespread criticism across the community. The change is also set to impact pro play, with EU & MENA head Maximilian ‘RiotMAXtheX’ Schmidt stating the drake will be unavailable during Week 3 of the LEC.

According to a statement published by the studio, although the Chemtech Drake fulfilled its design intent to have more impact than the original four elemental drakes, it has acknowledged that it “has just been too frustrating to play with – especially if you’re on the losing team.”

Currently, the Chemtech Rift makes it incredibly difficult for teams that are behind to establish vision in their own jungle. Both this and the zombification that occurs post-death after capturing Chemtech Soul have been condemned by community figures and pro players alike, prompting Riot to act.

With the drake now out of rotation, Riot says that it will be “iterating on design changes to solve the issues with the current versions, while maintaining the spirit of what we were originally trying to achieve.” Riot also states that the main focus of the changes will be on the Chemtech Rift terrain. Sorry, assassin players.

We heard your feedback and we're disabling the Chemtech Drake 👀

While there is no timeline for how long Chemtech Drake will be out of commission for, Riot clearly wants to get the changes right. For now, it’s good to see the studio recognising its faults and taking steps to rectify them.