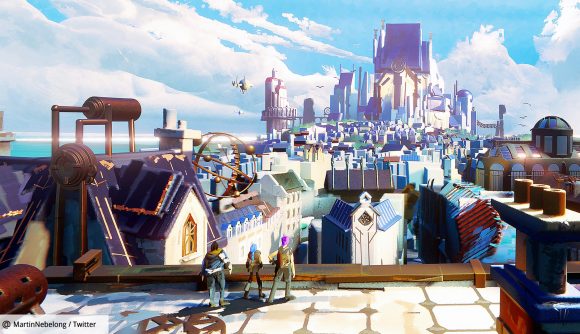 League of Legends’ Arcane animated series is, we think we can all agree, a feast for the eyes. From the towering heights of Piltover, to the murky depths of Zaun, Riot Games and animation studio Fortiche Production have done an immaculate job of bringing these great Runeterran locales to life.

With so much visual goodness going on, it’s of no surprise that artists all over the world have taken to reimagining the series through their own creative lens. One such example we were particularly amazed by comes from Danish artist and illustrator Martin Nebelong, who took the time to build the city of Piltover – perfectly matching its painterly style – in the PlayStation 5 version of Dreams.

Drawing inspiration from the first episode’s establishing shot of Claggor, Powder, and Vi looking out over the City of Progress, Nebelong says that the finished recreation – which took just over three and a half hours of work to complete – was produced using PlayStation Move controllers, rather than PlayStation VR.

You can see a fly-through of the final piece below, which Nebelong refers to as more of a 2.5D painting due to the camera angle it was made specifically to be explored through.

And a small flythrough of the updated version. Moving around in the scene like this makes it quite obvious that it was made to be viewed from a certain angle 😀#madeindreams #Arcane pic.twitter.com/GJv1nI2D3L

Needless to say, Nebelong has absolutely smashed it out of the park, showcasing the sheer creativity Dreams enables in the process. After calling Arcane itself “one of the most inspiring animated series I’ve ever seen”, here’s hoping he takes his Move controllers to the undercity of Zaun next.