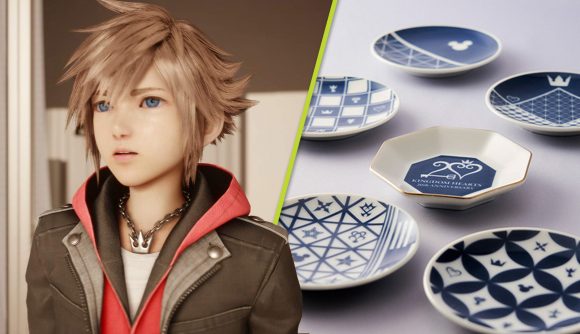 While fans hungry for Kingdom Hearts 4 might be left salivating for quite a while before the next instalment in the series is out, don’t for a second believe that Square Enix would just let you all starve. The company might not be willing to offer up a Kingdom Hearts 4 release date, but it’s more than happy to serve you something just as good: beans.

In celebration of Kingdom Hearts’ 20th anniversary, Square Enix has started accepting reservations on a commemorative bean plate set featuring various motifs from its Disney crossover series. With their simple and clean blue-white colour scheme and tasteful prints, these miniature dishes are almost certain to make more sense to most gamers than any Kingdom Hearts story, at least.

The plate set will go on sale via Square Enix’s Japanese online store on September 24, setting fans and bean curd connoisseurs back about 6,600 yen (roughly $50/£42/48€). Now’s your chance to serve a selection of beans to your friends and to test if they even recognise the hallmarks of the series beneath the sheer classiness of it all.

Fans will appreciate the myriad of references tucked away in the symbolism on the bean curd plates. Aside from the iconic Mickey Mouse insignia recognisable potentially to every human being on earth, Kingdom Hearts aficionados will be able to spot the symbols of enemies like the Heartless, the Nobodies, the Unversed and the Dream Eaters neatly displayed on a few of the plates.

The set already has its fans on Twitter, with Yoko Taro, director of the Nier series, retweeting the set announcement and writing (translated to English via Google Translate), “The Kingdom Hearts bean dish is nice.” Outside of Japan, the response has been a little lukewarm on social media, and that’s probably because not a lot of us have a pressing need for plates with which to serve beans on.

While the set is gorgeous, it is but one offering from Square Enix in celebration of Kingdom Hearts’ 20th anniversary. For those interested in buying the bean plate set and intending to actually use it, rather than letting it lie dustily on a shelf awaiting future collectors, it might behove you to know that there is also a complementary Kingdom Hearts-themed chopstick and chopstick rest with which to reach maximum Kingdom Hearts-related bean-eating fulfilment.

If you’d actually like to read about a Square Enix game while you wait for Kingdom Hearts 4, make sure to keep your beans baked for the Final Fantasy 16 release date – that one should be coming out much sooner, and who’s to say we don’t also get a commemorative bean plate for that too?