For fans of Aloy’s first outing, the wait for Horizon Forbidden West has been a long one. Horizon Zero Dawn’s cliffhanger ending left players with a lot of questions and now, almost five years down the line, we’re getting some answers. This is one of the most graphically impressive experiences out there and Guerrilla Games hasn’t missed the mark when it comes to the characters and stories you come across in this world, but it isn’t perfect. I have spent roughly 35 hours in the Forbidden West and found that there are a handful of issues tainting an otherwise exceptional experience.

Horizon Forbidden West is everything you’d expect from a sequel to Horizon Zero Dawn and then some, but the expansions made to the systems in place aren’t all good ones. Guerrilla Games’ new crafting system and the expanded skill trees create a tiresome web of upgrades and levelling so vast that it actually becomes a bloated experience. Throughout my time playing, I have spent just as much time trawling through the menu picking apart stats – and working out what machine parts I need to keep an eye out for – than I have picking apart machines and saving the world (again).

In isolation, however, almost every new addition is a fantastic one – it’s just a bit overwhelming all at once. You can spend time upgrading your weapons and outfits, improving them to hone in on your preferred playstyle. Or, you can spend your time exploring the Forbidden West – the Relic Ruins offer more challenging puzzles than we’ve seen before and make gathering collectables more than just finding them on the map.

Despite this myriad of additional features that feel like they get in the way a lot more than they should, Horizon Forbidden West’s world is enchanting and if you can avoid opening the menu for a while, you can quite quickly get lost in it. It’s a game that, like its predecessor, manages to keep you hooked with engaging characters and a wonderfully wild narrative.

Aloy just likes talking to herself. Out loud. About everything.

Wrestling with self-doubt and the pressures of being the Saviour of Meridian (after defeating HADES in Horizon Zero Dawn), Aloy remains an engaging protagonist. However, she’s almost too engaging at times – her not-so-internal monologue often has her commenting on the next stage of a puzzle, or calling out the direction you need to take. It removes the sense of accomplishment you’d want from solving a puzzle yourself, and the wonder from exploring and stumbling onto the right path. But, you learn to live with it – Aloy just likes talking to herself. Out loud. About everything.

Thankfully, Aloy’s voice isn’t the only one you hear and she has a wonderfully rich cast of secondary characters to bounce off of regularly. Zo and Kotallo, newcomers to the series, quickly became favourites over Horizon regulars Erend and Varl. It’s hard to skip any branching line of dialogue in a conversation as they’re all so well written. 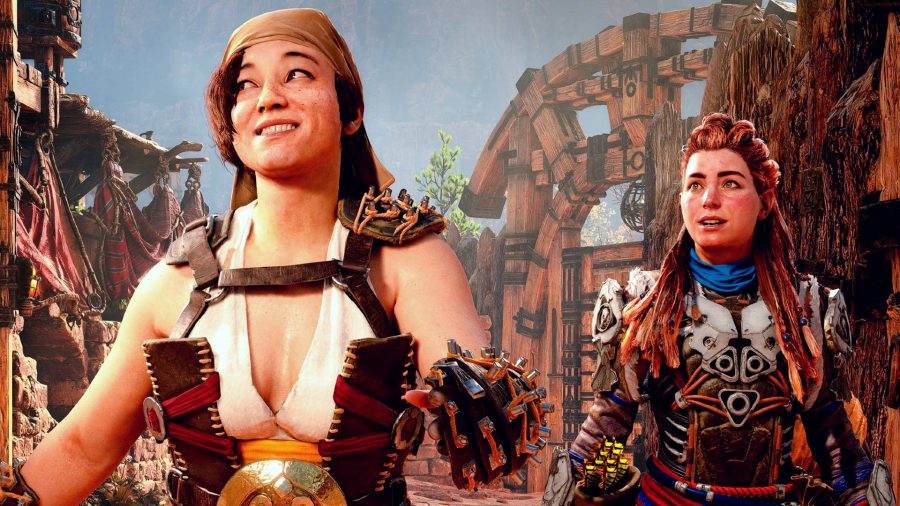 This incredible character work goes hand-in-hand with a wonderful narrative that builds on the world Guerrilla established with Horizon Zero Dawn and improves upon it immeasurably. Horizon Forbidden West’s main storyline is full of twists and turns, pushing Aloy and her allies to their limits. It does lack the emotional depth of the first game’s story, though. Aloy’s journey of self-discovery and self-actualisation is complete – her character development is less of a driving force in this game.

However, that’s not a bad thing. The narrative in Horizon Forbidden West is wild and Guerrilla’s storytelling shines when it comes to the character-focused narrative arcs and questlines that aren’t explicitly about Aloy. Much like the first game, her ties to Elisabet Sobeck make her vital in tackling the threats faced, but I’m just glad she’s not doing it alone. It’s hard to think of another game that offers such a wide variety of side quest activities – of course, there are a few fetch quests in there, but Guerrilla has framed them perfectly with an interesting story to tell in each one.

Stalking your technological prey has never been more thrilling

Incorporate this with Horizon Forbidden West’s incredible machine combat, which has been refined since the first Horizon game, and it becomes very hard to put this game down. Stalking your technological prey has never been more thrilling; Guerrilla has added more detail to each machine and there are more ways for you to dismantle them. Horizon Forbidden West thrives in the moments that intersect stealth and combat, the quiet before the storm, where Aloy lays her traps and steadies herself for that first devastating blow.

Don’t let that fool you, though. Horizon Forbidden West isn’t an easy game. This game rewards strategic gameplay and smart plays a lot more than Horizon Zero Dawn, even on normal difficulty. I found myself leaning into the elements more, taking time to work out what I needed to exploit, the right weaknesses each machine has, before initiating combat. The longer I played, the more I understood and, ultimately, the more enjoyable combat became. Human combat is still a little lacklustre, but Guerrilla’s improvements to melee combat and the introduction of some basic combo attacks help to make the most of this otherwise unchanged feature.

Guerrilla hasn’t just expanded combat options, though. The selection of in-game activities on offer is bigger and better than ever before. Horizon Zero Dawn’s Cauldrons – Old World dungeons that Aloy can explore to find new machine overrides and rare loot – have been vastly improved. They are still few and far between, an infrequent side activity with no real impact on the narrative, but they feel so much more worthwhile – they’re just a lot more fun than they were before. 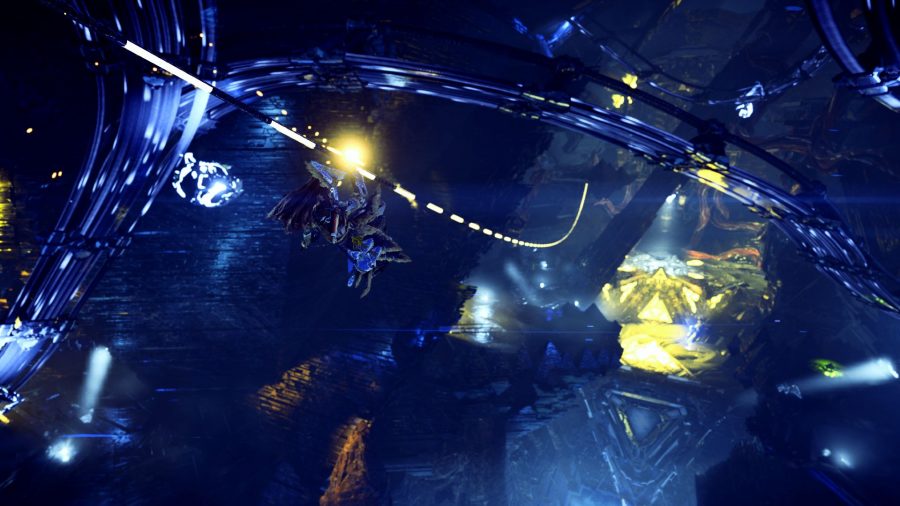 When you throw them into the mix of additional activities, things like Rebel Outposts and Hunting Grounds, there’s a lot more to do in the Forbidden West than Aloy realistically has time for. She’s on the clock trying to save the world, but when someone calls out for a game of Machine Strike – a board game, of sorts – I found it very hard to ignore.

On the PS5, Horizon Forbidden West is easily the most satisfying use of the DualSense’s unique features yet. From the low crackle of a knocked Shock Arrow to the rhythmic rumble of a pacing Thunderjaw, Guerrilla takes full advantage of the hardware on offer to create a truly next-generation experience when it comes to combat. When it comes to traversal and movement, though, Horizon Forbidden West falters.

It doesn’t feel like there have been any meaningful improvements to the way Aloy moves, despite the fact that almost every other aspect of the game has been built upon. At times, Aloy feels disconnected from the world around her. She can leap abnormally far, slide across rocky outcrops, and dive into a roll without any restraint. It keeps gameplay fluid but seems out of place against a backdrop and graphics that push for realism and immersion. 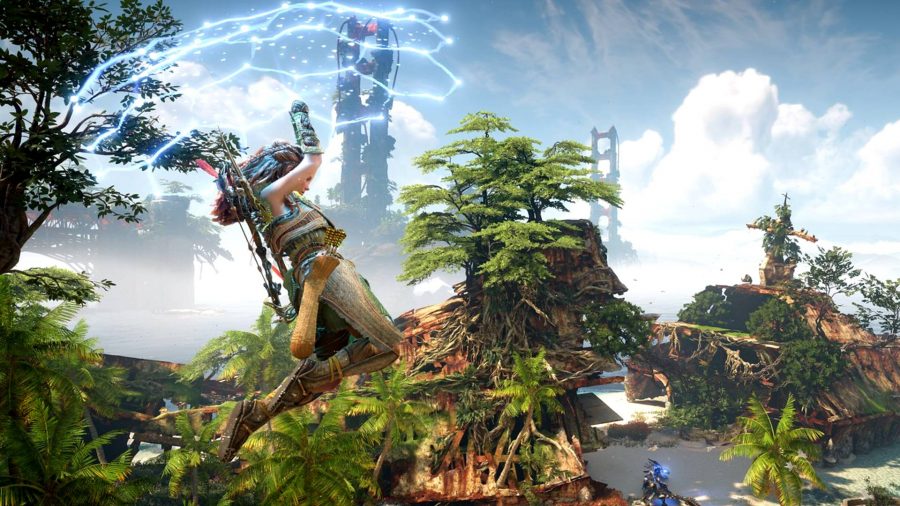 Adding to the disappointment, I’ve found that two of the three new traversal mechanics are broken. The new climbing mechanic, which takes a step closer to the free-climbing features you’d find in the latest Assassin’s Creed game, just doesn’t work very well. Aloy’s focus can be used to reveal an abundance of handholds and grips in a rock-face, but actually clambering up these handholds is painfully slow. Aloy also regularly misses the ones she should be able to grab when jumping across gaps. A lot of the time, I found myself taking a longer route to avoid these situations.

Then there are sections of the game that rely heavily on the new pullcaster mechanic, but this doesn’t always work as well as it should. When Aloy needs to jump and use this in mid-air, she often misses. The game acknowledges you’ve tried to use it – you can hear its cables reeling out – but it doesn’t seem to stick.

Thankfully, Guerrilla has littered areas where this problem occurs with ladders, but it’s unnecessarily time consuming and a frustrating distraction that pulls you away from the fantasy.

When you stalk a machine in the tall grass, you’re holding your breath in fear of being caught

This fantasy, though, is what it boils down to. Horizon Forbidden West, bar a few technical issues, does a wonderful job of pulling you into the fantasy world Guerrilla has created. When you’re walking through an Oseram settlement like Chainscrape, you feel like you’re brushing shoulders with the pioneers who have moved to the Forbidden West in hope of a better life. When you stalk a machine in the tall grass, you’re holding your breath in fear of being caught. Horizon Forbidden West is wonderfully atmospheric, but every now and then the mask slips – especially when someone blurts out the word “savage” and you’re forced to remember one of the great shames of the first Horizon game. 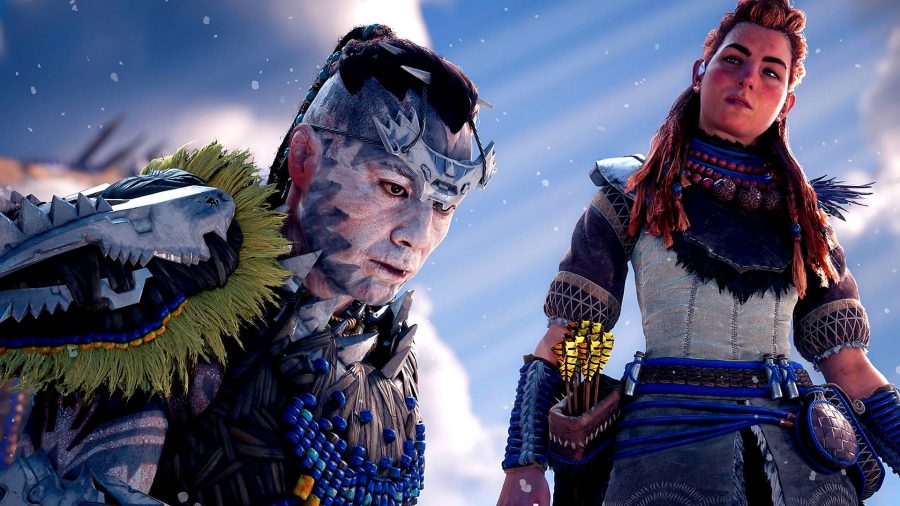 Horizon Zero Dawn had issues with cultural appropriation and when you’re aware of them, it’s hard to forget. Holly Green’s discussion on the Frozen Wilds DLC and its heavy reliance on native cultures is the perfect deconstruction of why this is actually an issue in the first place. It’s not limited to Horizon Zero Dawn, though – it seeps into Forbidden West too.

Dia Lacina’s piece on the damage done by the loose use of derogatory terms – words like “primitive” and “savage” – is something I couldn’t help but keep in mind while playing Horizon Forbidden West. It doesn’t take long for someone to label Aloy a “savage” with a sharp tongue, and with a lot of Horizon Forbidden West’s narrative taking place alongside the Teknath tribes, it’s a shame that the situation hasn’t really improved. Guerrilla continues to borrow from native cultures from around the world and, a lot of the time, it feels like it’s purely in a cosmetic way.

Despite the intermittent gameplay issues – and the aforementioned discomfort with cultural appropriation – Guerrilla Games has done a lot of things right with Horizon Forbidden West. If you enjoyed the first Horizon game, this is more of the same – but turned it up a notch.

Guerrilla has raised the bar when it comes to world-building and it’s hard to think of another game where every single NPC looks so damn good. The onslaught of options when it comes to crafting and upgrading can be overwhelming at first, but once you get your head around everything on offer, it’s hard not to enjoy this game.

Horizon Forbidden West is a true next-gen experience and one of the best games available on the PS5 right now. With breath-taking graphics and fantastic character work, Guerrilla Games has raised the bar for open-world action adventure games. It's not perfect, but you can't help but want to play more.