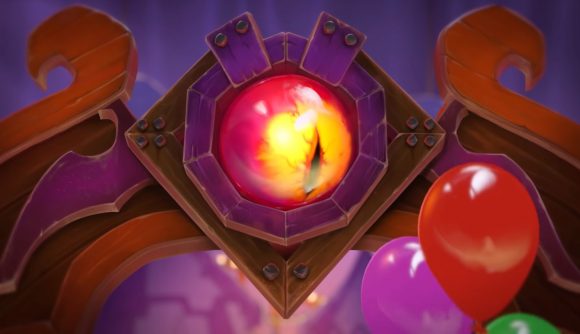 Blizzard’s Hearthstone has teased the next set for the mega popular digital TCG. From the teaser, we’re getting a sort of haunted circus vibe with the musical choice, as well as the red balloons floating past the all-seeing eye, staring at you. This new set would make it the 16th Hearthstone expansion set released since the game’s original release.

To celebrate the stream, Blizzard has given details for how you can watch the reveal of the final phase of Hearthstone’s Year of the Phoenix, as well as details on how to get some free packs. You can get one Scholomance Academy pack if you watch the broadcast on Twitch for at least 15 minutes. If you watch for 30 minutes, you’ll get another pack.

The Scholomance Academy set introduced us to dual-class cards, which are cards that two specific classes can use in a deck, rather than just one class or all classes that previous cards had. There were also new keywords like Studies to discover cards of specific types while making them cheaper to cast, and Spellburst spells that trigger one-time additional affects when played.

We don’t know anything about the new set just yet, but that eye and creepy circus aesthetic sure has us curious, not least of which because we want to know which cards we can slot into the best Hearthstone decks list!

Come one, come all! Enjoy the festivities and stay ᶠᵒʳᵉᵛᵉʳ