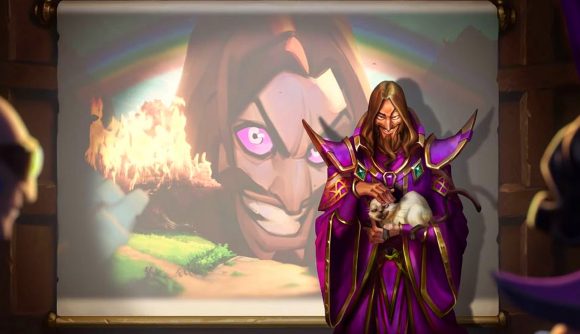 Hearthstone has unveiled a brand new mode, Duels, which takes one of fans’ favourite experiences and gives it a PvP twist. It will begin, as you’d expect, with Season One, and will be regularly updated. Season One is titled Wizard Duels, will use the latest Scholomance Academy expansion, and gives instructors in the set totally new powers.

Speaking to our friends at PCGamesN, lead live content designer Patrick Nagle explains the concept of Duels and why he thinks it will be a great addition to Hearthstone.

“We took the previous dungeon run adventures and we kind of mashed them with an Arena format,” he says. “So, you play a dungeon run and you get to keep playing it, beating opponent after opponent until you lose three times – but it’s also PvP, so you’re playing a dungeon run against other people. It’s something that we’ve loved, but it’s been asked for by fans for a while, too, so it’s been a twinkle in our eye for a while. It’s going to be super fun.”

Each new season of Duels will add a different lineup of heroes and powers. However, card sets will also be rotating all the time, with Scholomance Academy, Curse of Naxxramas, and Night in Karazhan all confirmed for the mode’s early access period.

It’s clear Blizzard wants some real adrenaline pumping PvP moments with this mode. Don’t believe me? Check out Duels’ metal as hell trailer. Then you will.

Early access will begin today, October 22, and run until November 11. This will only be open to players that have pre-purchased a bundle of the newly announced expansion Madness at the Darkmoon Faire.

Duels will be available for all Hearthstone players on November 12.