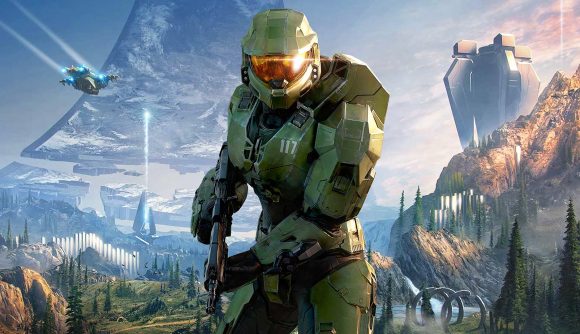 Halo Infinite has been in a perpetual spot of bother since launch. Delays to the rolling out of heavily-anticipated features like Forge mode, backlash against the game’s monetisation, and an overall sub-par multiplayer experience have left developer 343 Industries plugging holes in a slowly-sinking ship. However, as Infinite’s head of creative Joseph Staten was brought back into the franchise to help save Infinite’s development, 343 is now employing Bungie veteran Paul Bertone to serve as its technical design director.

“I’m happy to confirm Halo veteran Paul Berton has joined the team as studio technical design director”, Staten says in a tweet. Having met back in the late-90s, Staten and Bertone worked together on the first three mainline Halo games, ODST, and Reach. Staten further states that he is “thrilled to have Paul help lead the future of Halo Infinite.”

Bertone served as Bungie’s design director from 2000 until early 2012, when he left the studio behind. Since then he has worked as a design lead for a number of studios, including Undead Labs where he worked on State of Decay 2, and most recently Highwire Games, which is currently developing the highly-controversial Six Days in Fallujah.

According to his LinkedIn page, Bertone had already started at 343 back in June.

I’m happy to confirm @Halo veteran Paul Bertone has joined the team as Studio Technical Design Director. Paul and I met in 1999, back in Bungie’s Chicago days, and then shipped Halo 1-3, ODST and Reach together. I’m thrilled to have Paul help lead the future of #HaloInfinite. pic.twitter.com/oYR8bhOBak

Needless to say, Bertone and the Infinite team have their work cut out for them. However, should Staten’s return to the franchise be anything to go by, enlisting the services of other experienced developers with an intimate knowledge of Halo seems to be a step in the right direction.