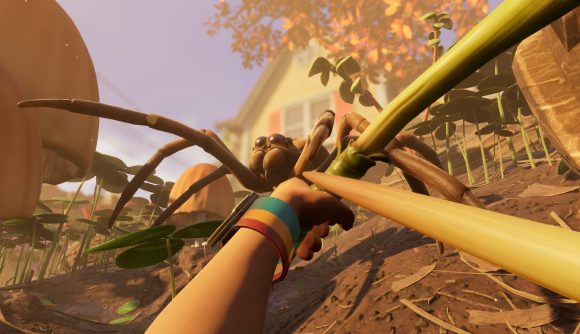 Grounded, the smaller-than-life survival game from Obsidian, is currently available on Xbox One, Xbox Series X|S, and PC in early access and players will be pleased to know they can join over 10 million players with the full Grounded 1.0 release date on September 2022. If you’re a fan of… dirt and bugs? Well, then you’re going to want to check this game out.

The Grounded 1.0 release date is going to see new weapons and armour added to the game’s selection of equipment, high-octane beetle-based warfare, and even more hugely terrifying boss fights with giant insects. If this sounds like your cup of tea, then you might want to clear out some space on your hard drive; this game is going to be available on Xbox Game Pass, too!

Grounded has seen many updates since its initial early access launch in 2020. These updates added new features like additional eight-legged bosses, new gameplay mechanics such as swimming, and being able to sit with your friends. On top of that, little critter pets were added, in addition to many other extras. You can see all the updates so far on the Obsidian Grounded blog.

The bugs are striking back with Grounded 1.0, though, and players are going to need to band together to take them down. Thankfully, that shouldn’t be too much of a problem if you keep your wits about you.

If you want a glimpse at the new content coming? Check it out below:

Do you know how the teens got to be so🤏? Well, this September you'll find out when the story releases to all Grounded players!

Grounded has been enjoyed by both those on Twitch and survival game fans and it’s still seeing huge upticks and surges of popularity on Xbox Series X|S, Xbox One, and PC, should give the game a huge surge! Oh, and if you have Game Pass you can play it on there.