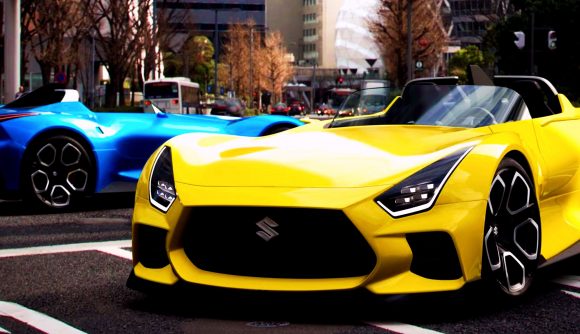 Gran Turismo 7 may have raced onto PlayStation consoles over two months ago, but fans have still been able to enjoy regular content updates from Polyphony Digital since. The latest title update, labelled Gran Turismo 7 update 1.15 has introduced three new vehicles to the popular racing game – building on an already impressive Gran Turismo 7 car list – and introduced a new Spaces location for players to check out.

Looking at the Gran Turismo 7 update 1.15 patch notes, it has been revealed that three cars will be introduced to the game. These are the 24 Hours of Le Mans-winning Toyota GR010 Hybrid ‘21, the Suzuki Vision GT, and the Roadster Shop Rampage.

It’s safe to say that Polyphony Digital are chuffed at the new additions, with the announcement tweet of their arrival revealing that the Suzuki is “a never before seen Vision Gran Turismo” alongside the fact that the Roadster is a “SEMA Show GT Awards” winner.

If you’re looking for a glimpse of these cars on the tarmac, you can see all three of them in-game in the aforementioned tweet below:

These three cars, and the addition of New Orleans to the game’s Scapes, aren’t the only things Polyphony Digital have introduced to Gran Turismo 7 in this update, though.

If you look at the update details, you’ll find that several new events have been added to the ‘World Circuits’ alongside seven new paint colours and a new Online Time Trial. There’s also been ranking resets for events under Moby Dick and The Human Comedy, fixes for the Race BGM playlist within Showcase, and revised prices in the Hagerty Collection based on real-world valuations. Polyphony Digital has confirmed that the next pricing revision is due August 2022 – so, if you don’t like them now, you’ve got a bit of a while to wait.

Gran Turismo 7 has been changing its stingy in-game economy and the developer has pledged to “constructively resolve” credit grinding, but some of the game’s rarer rides are still pricey. There’s no information how much these new cars will set you back, but you may need to win a few races before you can think about picking one up.