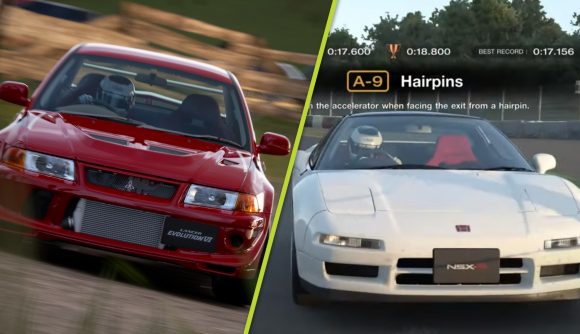 While discourse around videogame difficulty has largely involved Elden Ring bosses as of late, spare a thought for Gran Turismo 7 players who have their own monstrous boss battle to contend with: the A-9 License Test.

If you’ve had to work your way through the National A License in Gran Turismo 7, you will have undoubtedly come across what is an absolute pain of a driving test, the A-9: Hairpins. While hairpin corners are some of the trickiest to execute in motor racing, this License test takes things to a whole new level. While getting Bronze on the test isn’t too tricky, those trying to get Gold completion on all the tests are finding this one almost impossible.

We too have had the displeasure of trying to get Gold in the A-9 test for hours on end, uttering every curse word under the sun at the Honda NSX Type R you are given to complete the challenge in. What players are noticing is that every time they look to emulate the racing line taken by the ghost car, their NSX simply won’t turn in the same way.

Luckily, as we highlighted in our Gran Turismo 7 review, turning off the Countersteering assist (which is on by default) will improve your chances of making the tight corner, so there is light for those still yet to get Gold.

Because of its notorious difficulty, the A-9 has been one of the hottest (and most memed) topics in the Gran Turismo subreddit.

This poor soul says that they “can’t take this anymore” as they cross the line, only to miss out on Gold by four thousandths of a second.

The comparisons between Elden Ring’s difficulty and the A-9 test’s difficulty have also been explicitly made.

Others have also joked about how their experience with this infuriating challenge will hone their actual driving skills, and others have delicately placed the A-9 into some well-known meme templates.

While there are some seriously tough challenges later down the line, none have frustrated players as much as the fearsome A-9. We’ll never be able to look at a Honda NSX the same way again…

If you want some retail therapy after a long day of not getting Gold on the A-9, take a look at the Gran Turismo 7 Legendary cars. We promise they’re better at hairpin bends than that Honda.