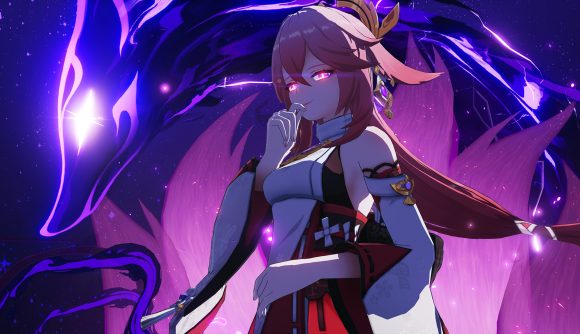 Genshin impact players are now but mere days away from finally being able to (hopefully) bring Yae Miko home. The Guuji of the Grand Narukami Shrine, and owner of the Yae Publishing House has climbed to the top of many players’ wishlists since she was showcased in last week’s Genshin Impact 2.5 livestream. Now, a newly reported leak appears to show the other characters and weapons accompanying Yae on her banner.

According to a Telegram post made by ‘Mia’, a popular leaker in the Genshin space, players have the chance of rolling Thoma, Fischl, and Diona as the featured four-star units en route to acquiring the Electro priestess. Thoma and Diona were last featured on Hu Tao’s banner back in November, while Fischl hasn’t been seen since Klee’s run in June.

Finally, Mia says that the four-star weapons available on this banner will be Stringless, Sacrificial Sword, Wavebreaker’s Fin, Eye of Painception, and Painslasher.

With a great selection of characters and weapons potentially coming to Yae’s banner, Raiden wanters will have to keep their Primogem purse strings tight ahead of her return later on in Genshin Impact 2.5.