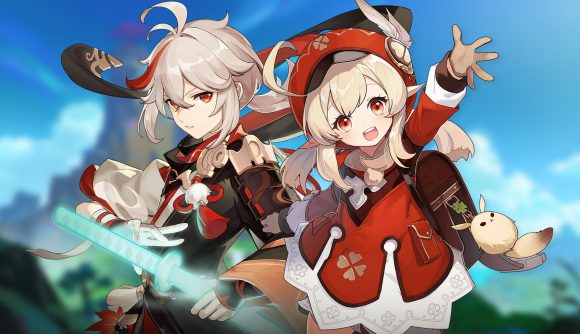 Genshi Impact 2.8 is on the way, and it’s an exciting time to play the hit gacha-infused ARPG. The Golden Apple Archipelago is back, and players will be able to experience it in its full splendour during the Summertime Odyssey event. Of course, many will be eagerly awaiting the Genshin Impact banner for 2.8 to roll round, which during its first phase will see both Kazuha and Klee get reruns. Now, the Genshin Impact 2.8 Phase 1 banner four-star characters have reportedly been leaked.

According to reputable community leaker ‘BLANK’, Kazuha and Klee will be joined by Shikanoin Heizou – which corroborates a previous report from fellow leaker ‘Lumie’ – Ningguang, and Thoma. As the latest upcoming addition to the Genshin Impact characters, Heizou is set to be the game’s first male catalyst user.

Ninguang and Thoma, meanwhile, are both returnees to the Genshin banner. Ninguang was last featured on Xiao’s first rerun banner back in January this year, while Thoma gets only his third runout. The Pyro user was last seen on Yae’s banner back in February, after debuting on Hu Tao’s banner last November.

While there hasn’t been a report on the four-star weapons we’ll be seeing in 2.8 Phase 1 just yet, we at least know that Kazuha and Klee’s unique weapons: the Freedom Sworn sword and the Lost Prayer to the Sacred Winds catalyst, will feature.

Needless to say, it shouldn’t be long before we get official confirmation from HoYoverse on the full contents of the 2.8 banners.