Forza Horizon 5 Series 4 is set to kick off at the start of February offering up four weeks of non-stop Seasonal Events, Championships, rewards, challenges, and more. But, Playground Games hasn’t revealed a lot about what Series 4 will hold for players just yet.

However, some hints in-game and the Coming Soon page of the Festival Playlist has revealed some features and new additions to Playground Games’ open-world racer in February. By the looks of it, it seems like Series 4 will be a bit more of a subdued entry in the Festival Playlist compared to the winter theme of Series 2 and the New Year celebrations featured in Series 3.

Each individual Season within Series 4 will also reset at this same time every Thursday.

Forza Horizon 5 Series 4 will once again feature ten new cars for players to unlock. Two will be available each week for completing events within a Season and earning a specific amount of points. This makes a total of eight cars.

The final two will be available across the whole Season and unlocked by reaching cumulative point milestones across all four weeks.

As for the exact cars available in Series 4, Playground hasn’t revealed them yet. However, we should get a glimpse at them during the next ¡Let’s Go! Forza Horizon 5 showcase later in January.

Alongside the individual cars, the Coming Soon page in the Festival Playlist menu says the Series 4 will also bring new country race suits, which we theorise will allow players to express their national pride with national flag-themed race suits. 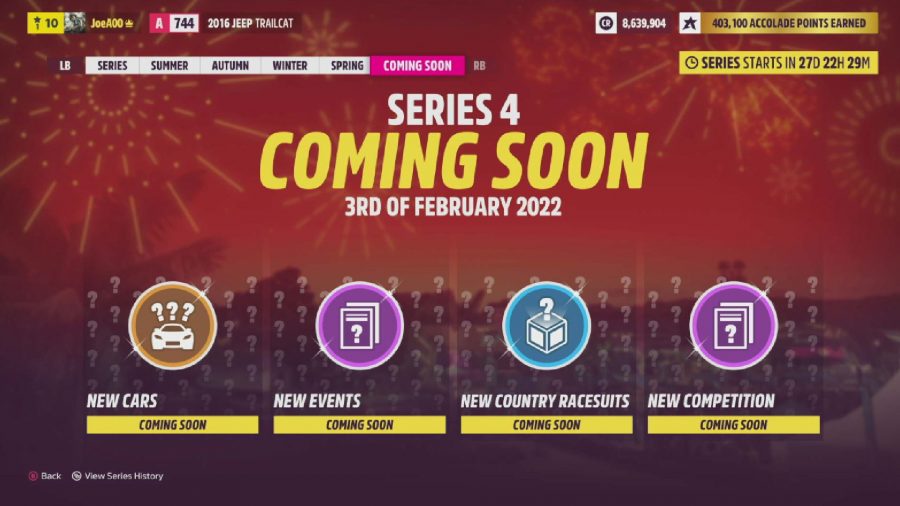 Forza Horizon 5 Series 4 will also bring new events to the game, according to the Coming Soon page.

The same page also describes a “new competition”. However, we don’t know what that means right now. But, we should find out more at the next ¡Let’s Go! Forza Horizon 5 showcase in a few weeks time.

That covers everything we know about Forza Horizon 5 Series 4. Be sure to keep coming back as and when new details get announced in the coming weeks!