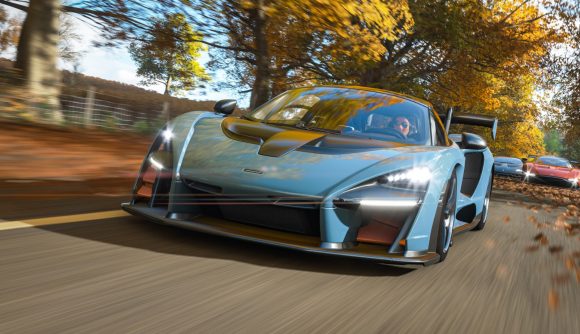 With Forza Horizon 5 early access starting to roll out in some regions, and the full release of the game onto Xbox Game Pass just around the corner, players are beginning to switch off Forza Horizon 4 for the last time. To commemorate the occasion, players on Reddit are sharing their final snaps from the game’s photo mode.

Forza Horizon 4 released more than three years ago, and dedicated players have built up hundreds and hundreds of hours of playtime. However, with a new Forza game comes a fresh, empty garage to fill up, and that means Horizon 4 players are having to say emotional goodbyes to some of their favourite cars. Over the last 24 hours or so, the r/Forza and r/ForzaHorizon subreddits has been inundated with posts from FH4 players leaving final photos and mementos about their time with the game and the cars they’ve become so attached to.

From hot hatches to snarling supercars, there are a lot of extremely loyal cars about to be left behind, gathering dust in the servers of Horizon 4.

While the launch of a shiny new game in any series – especially one that has been pretty much unanimously adored by reviewers, including us – is certainly an exciting time, it’s clear that saying goodbye to Forza Horizon 4 and players’ beloved cars is not as easy as you might think.

Some were even compelled to create custom license plates to make the perfect farewell photograph.

Sure, once players get a few hours into Forza Horizon 5, all thoughts of abandoned Abarths and deserted Mustangs will likely vanish.

But the outpouring of farewell posts is proof that, even in the shadow of what looks to be one of the all-time great racing games, the slightly buggy but beautiful Forza Horizon 4 will have left behind a legacy all of its own.