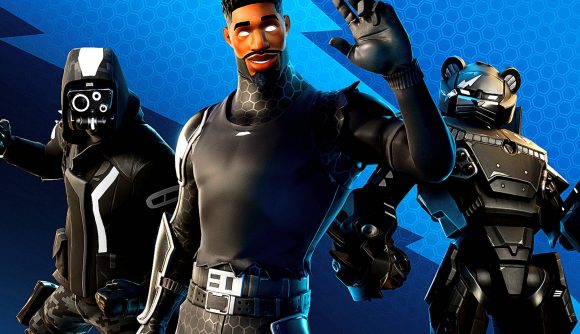 The Shadow Strike Fortnite skin bundle is back in the Item Shop after almost two months out of rotation, and it can’t have come at a better time. Epic Games is building up to something big with the Chapter 3 Season 2 live event – dubbed Collision – and the Mecha Team Shadow outfit seems like the perfect skin for the occasion.

Why do these skins come at the perfect time for Fortnite fans? Well, we’re not too far away from the Chapter 3 Season 2 live event start time and all the teasers we’ve seen so far appear to confirm that the gigantic robotic bear – named officially as Mecha Team Leader – is going to return for the big moment.

The Final Showdown event, which saw Mecha Team Leader take on The Devourer, is easily one of the most memorable events we’ve seen in Epic Games’ battle royale so far. With the robot’s return all-but-confirmed, fans are looking forward to more spectacle ahead of Chapter 3 Season 3’s start.

However, that’s all we know about the Collision live event right now – Epic Games is keeping tight-lipped about it, which isn’t surprising. If you’re looking for a free skin, you can check out everything we know about the Fortnite Volcanic Assassin Pack here. If you’re scrambling to collect everything you can before the new season, this guide to the Fortnite Omni Chips locations should help.