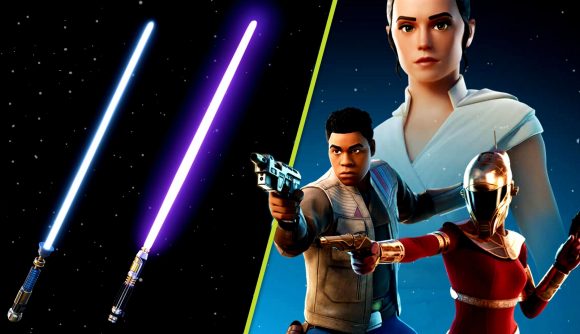 Fortnite is celebrating Star Wars Day again and there’s a lot to look forward to for fans of A Galaxy Far, Far Away and Epic Games’ battle royale. Star Wars items from the past, including several Lightsaber melee weapons and the iconic E-11 Blaster, have been unvaulted alongside the return of epic Fortnite Star Wars skins in the Item Shop. If you’re busy on May 4, you’ll be pleased to know that the celebrations aren’t just limited to Star Wars Day itself – all of this content is going to be available until May 17!

Yes, that’s right. We’re getting two whole weeks of Star Wars content in Fortnite. If you’re wondering where to find a Lightsaber in Fortnite, all you need to do is start looting. Lightsabers, like last time, are going to be scattered across the island as a rare loot item.

Unlike last time, though, the line-up of Lightsabers has changed slightly. For the next two weeks, players will be able to get their hands on Luke Skywalker’s Lightsaber, Mace Windu’s Lightsaber, and Kylo Ren’s Lightsaber alongside Obi-Wan’s Lightsaber.

If you’re looking for a ranged option, then players can also get their hands on an Imperial E-11 Blaster Rifle for the next two weeks. Stormtrooper NPCs will be handing these out in exchange for Gold Bars, or you can find these in the standard loot pool.

Adding to this experience, Fortnite players can complete new Star Wars quests to earn additional XP and the Empire Banner. These quests include blocking with Lightsabers and damaging enemies with an E-11 Blaster Rifle. If you manage to finish all the currently active Star Wars Fortnite quests, you’re looking at netting an additional 180k XP.

Returning to Fortnite from a galaxy far, far away…

Lightsabers are back! Hop in now to use the Lightsaber item, complete limited time quests, and more!

At the moment, we don’t know if there’s anything else planned for the duration of this Star Wars celebration in Fortnite – but, there might be. Star Wars fans could be seeing Obi-Wan Kenobi join Epic Games’ battle royale in the near future; however, nothing has been confirmed yet.

Obi-Wan’s Lightsaber has been specifically introduced as a new Lightsaber melee weapon for this year’s celebration. The Stormtrooper NPCs have “set up checkpoints in search of Obi-Wan”, according to the Fortnite blog post. Oh, and there’s an unseen cloaked character wielding Obi-Wan’s Lightsaber at the end of a recent trailer. Disney Plus’ Obi-Wan Kenobi series is due to start on May 27, so it wouldn’t be outside the realms of possibility to see an Obi-Wan Kenobi Fortnite skin in the near future.

But, for now, players will just have to be content with Kylo Ren, Rey, Finn, Zorii Bliss, Krrsantan, Boba Fett, Fennec Shand, a Sith Trooper, and an Imperial Stormtrooper. Okay, that’s actually quite a few Star Wars skins. In other news, a Fortnite Scarlet Witch skin has been leaked by dataminers and the Fortnite 20.30 update added a Drum Shotgun buff among the shotgun balancing changes.